Sacred Heart as a diagram: less as more? 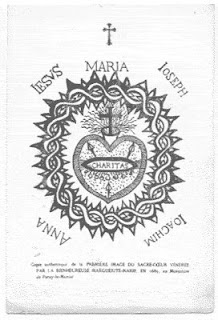 The devotion to the Heart of Jesus goes back to the Middle Ages. However, as far as I can make out, the first artistic representation of the Sacred Heart in a diagrammatical form was composed by St Francis de Sales in 1611. This was devised as a logo - as we would now term it - for the Order of the Visitation which he had cofounded with St. Jeanne de Chantal. This was comprised of a heart pierced by arrows on which was written the names of Jesus and Mary and surmounted by a cross. The heart was surrounded by a crown of thorns. ( Must try and get a copy! ) Saint Margaret Mary was a member of this order. It is thus not so surprising that the images she produced to promote the devotion owed much to this design of St Francis.

The drawing which St Margaret Mary was to produce in 1685 was itself a fusion of the evolution of the devotion at that stage, and her own mystical experiences. The main additions seems to be the idea of the heart as a furnace and the word ‘ Charitas’ - rather than Jesus and Mary- in the middle of the heart. She also adds a additional arrow. She wrote (in 1689) that:

I saw this divine Heart as on a throne of flames, more brilliant than the sun and transparent as crystal. It has its adorable wound and was encircled with a crown of thorns, which signified the pricks our sins caused Him. It was surmounted by a cross ...

These were to constitute the main features of the subsequent designs which derived from her experience. And what is clear from her letters is that these diagrams for private devotion and which in due course became more devotional pictures were seen an integral part of the devotion to the Sacred Heart. In her life-time it appears that the Scared Heart qua diagram was the main form of representation.

Although the painting by Batoni in 1767 was to introduce the idea of Jesus holding and later pointing to the heart, the symbol of the ‘disembodied’ heart has remained as a devotional symbol as well as been widely used as a logo and popular design. However, it is noticeable that few could be described as ‘ ‘transparent as crystal’. Most are distinctly fleshy and lacking any sense of transparency! The original drawing, however, shows the heart as transparent and not inked or coloured in.


Reflecting on the diagram which shows the heart in relation to Jesus’ human family ( Jesus,Mary and Joseph and Mary’s parents, Anne and Joachim) it reminds me of a seating plan for a dinner. It serves to remind me that through Jesus becoming man, God now has a human heart. God is with us: one of the family of man. With us in what: the pain and suffering that is inevitable for humanity. But Jesus has suffered for and with us. But we hurt and wound this love by our behaviour. He is one of us: the fire of God which Moses saw burning on the holy mountain is now burning in the human heart. Burning with love for us. The diagram works well in explaining the mystery of God’s love for humanity. As a spiritual heuristic, it works. At first I did not think so, but the more one reflects and meditates on this simple little drawing which Saint Margaret Mary uses to explain what she experienced, the more it works: it draws you in. Less is more. The 'holy pictures' which became popular in the 19th and twentieth centuries showed the 'disembodied' heart design, but in far more graphic terms. But, try using the original as devotional object and it does serve to focus attention the meaning of the Sacred Heart. Little wonder that it proved so effective as a means of spreading the devotion. However, by the late 18th century it had, as far as I can discover, disappeared as an image to be replaced by the Batoni type images. It is not an image which tries to engage the viewer emotionally. It is a kind of 'mind map ' or 'spiritual map' to guide our exploration of the meaning of the Sacred Heart. As for myself, I think I will print a copy out, or try and get hold of a holy picture and use it, rather like the London underground map to orientate myself as I contemplate the Sacred Heart. Yes, less is definitely more.
Posted by DWP at 14:38