The Evolution of the Image of the Sacred Heart (1): Pompeo I hardly knew ye 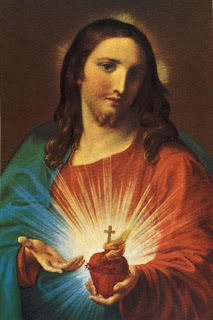 By now, I have grasped that an icon involves a good deal of reflection and prayer. And what strikes me as so notable about this project is that the deeper I am pulled into the Sacred Heart, the deeper I go into myself. I never thought that this would be about me, but it appears that the Sacred Heart is somehow all about me, or rather my response to the rays of light which seem to pierce my heart. For that reason, the story of the evolution of the image actually seems to begin, for me, in the National Museum of Wales in Cardiff in the 1960s. I see myself there as a teenager: hungry to know more about everything. I hated school, but a loved knowing things. I loved to go to the museum whenever I could and spend hours wandering around picking up knowledge like a thieving magpie. I used to wander around the art galleries and prided myself on knowing all the paintings and their artists. In truth, I was just waiting to meet a girl who I could impress with my knowledge: but I never did. But I did fall in love with many of the women in the paintings. Every time I re-visit the galleries they are there, still as fresh and young as they have always been: whilst I inevitably age. In the past few months as I have looked at so many images of the Sacred Heart one name sticks out. It is a name I associate with a painting in Cardiff of a group portrait of Sir Watkin Williams Wynn, Thomas Apperley and Captain Edward Hamiliton. Sir Watkin is one of the most famous patron of the arts ever to come out of Wales. It was painted by Pompeo Batoni around 1778. ( SEE HERE ) I used to roll his name around my mouth: I could almost taste it. I did not care much for the painting, but I adored the name Pompeo Batoni. In his day he was one of the most famous artists in Rome. A few years ago there was an exhibition of his work at the National Gallery in London and I meant to go and see it, for old times sake. Little did I know at the time that Pompio Batoni and I were so well acquainted. Me and Pompeo, we go way back. His painting of the Sacred Heart is perhaps one of the most defining images of the Sacred Heart and was hung all over the place when I was growing up. It would be in homes, class rooms and church halls and given as holy pictures to reward good work. As I was rather lazy in school ( to say the least!) a holy picture of Pompeo Batoni’s Sacred Heart always eluded me. If only I had known. I could have said ‘Thank you miss: you know that is by Pompio Batoni, don’t you?’ What a chance to show off, but it is too late now.

My friend Pompeo it appears was responsible – perhaps more than anyone else – for taking the idea of the Sacred Heart, which had been represented symbolically (up to 1767) and made it into a highly anatomical baroque image. The heart thereafter is no longer a symbol as was represented in the early images that came out of the devotions promoted by St Francis de Sales, St John Eudes and St Margaret Mary ( and others) . In Pompeo Batoni’s picture for the altar of the Church of Gesu in Rome (1767) , Jesus is shown looking straight at us holding his burning, bleeding heart which is crowned by thorns and topped by a crucifix. It is this image – or something very much like it - which is behind Teilhard’s head in the picture taken in 1917 mentioned in an earlier blog. As far as I can discover, it is this picture by Batoni which was to shape the direction which the devotion to the Sacred Heart was to take in the succeeding centuries. Batoni is directing our attention to the heart as the object of the devotion. And it is the heart which is to become the focus of the devotion. The painting was completed two years after Clement XIII had given approval for a liturgical feast in honour of the Sacred Heart (1765) and several years before the devotion was approved by Pius VI ( 1794) It appears that Batoni’s work rapidly became the model or prototype for the mass produced images of the Sacred Heart which became popular in the 19th century. Variations occurred, particularly in respect of the holding of the heart. Later images show Jesus opening his gown to reveal the heart portrayed in various degrees of anatomical realism. But however you look at them, they are all, in some way on other, derived from Batoni’s vision of the Sacred Heart. When next I am in Cardiff I shall look at his portrait of Sir Watkin and friends with new eyes: but first, of course, I have to visit the girls who captured my heart when I was just sweet sixteen, well sixteen anyway.
Posted by DWP at 16:11