The Sacred Heart of 2017- the shrine in Guernsey 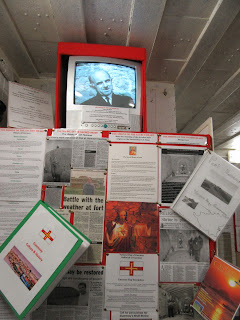 As the year comes to an end  I have reflected on what image of the Sacred Heart has had the most impact on me over the past year.  And without doubt it was an image or rather a space I found whilst in Guernsey in the summer: Le Galloudec Shrine.   By chance we came across a chapel which had been constructed in what had been a German second world war defence building by a man who was determined to transform it from a symbol of hate into a symbol of love. 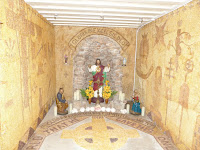 The Le Galloudec Shrine is located at Fort Hommet at Vazon in what had been a military bunker during the German Occupation of the Island in the Second World War.  A local man, Hubert Le Galloudec, began his remarkable work in work in the 1950s creating a chapel devoted to the Sacred Heart out of  local sea shells.  Sadly it was badly vandalised and was closed in 1971, but  Friends of the Le Galloudec Shrine restored it and opened it to the public in the summer of 2008. Read a BBC report about it HERE.

Of course, the trouble with the reports that are around is that they really don't get it at all!  They describe it as essentially a shrine decorated by Biblical themes, images and symbols. Well it is.  But when you study it in more detail it is apparent that either by accident or design - and I think the latter- old Hubert was making a far more profound statement about the Sacred Heart.  The Shrine is placing the devotion into its Biblical and theological context.  To me it is a simple but eloquent statement of the theology which was expressed by  Pope Pius XI  in Miserentissimum Redemptor in 1928 when he famously said that the Sacred Heart was: " ... a summary of all our religion and, moreover, a guide to a more perfect life contained in this one devotion?".  Furthermore, Le Galloudec seems to addressing the very themes we find in Pope Pius XII's  encyclical Haurietas Aquas published in 1956!   It is not a great work of art, but it is a great example of someone who had the vision and courage to proclaim the relevance of the Sacred Heart to building a civilization of love from the ruins of one which was built on hate and evil.  It is an inspiration for us today as we look out on our world torn apart by the very same forces that built those ugly bunkers.

Hubert Le Galloudec built a shrine.  What can we build?
Posted by DWP at 23:05 No comments:

The icon painters of Bethlehem 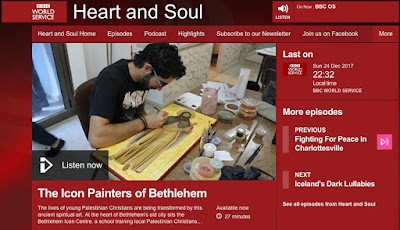 It was wonderful to hear about the progress of the Icon school in Bethlehem through a Christmas broadcast on the BBC.  Hear it here.
If you want to understand what an icon is all about, you could do no better than listen to the interviews with Ian and his students.