I had the great pleasure to meet the late Cardinal Basil Hume, Archbishop of Westminster, on several occasions. One particular episode I will always remember with great fondness. We had asked him to speak to the College Catholic Society – leaving the topic open. He wrote back saying he would give a series of talks on prayer. I confess I thought that was not the kind of thing that would get people coming along. But I was so wrong. The first session attracted a dozen or so, the next was three times that and for the final session we had to move to a large lecture theatre! He greatly impressed Catholics, non-Catholics and non- Christians and people of no faith alike. AND, (of course) he very much appreciated Teilhard: as documented in a note in the British Teilhard Society Newsletter.

From the Teilhard Society Newsletter, No 22: October 2006.


Mrs Christine Laubin, one of our new members who attended the 2005 conference, has passed over a copy of some notes which she typed up after listening to an evening address on ‘Discovering God’ made by Cardinal Hume. It was one of a series of events throughout 1986 called ‘Mission Hitchin,’ which involved all the Christian churches in that area.
In response to a question about how to approach and help agnostics to faith, the Cardinal had recommended offering a copy of Teilhard’s Divine Milieu. He added that he always bought any secondhand copies of it he saw in bookshops for that very purpose. Over the next couple of years or so Christine did the same thing, eventually sending off a parcel of ‘Divine Milieu’s’ to the Cardinal.
In his reply to her, he wrote:
‘It was extremely thoughtful of you to have collected those copies of The Divine Milieu. I marveled at your memory of my referring to it when I spoke at Hitchin.’ He went on to say: ‘Incidentally, I have often mentioned that evening I spent at Hitchin Town Hall to others. I thought it was a wonderful evening and a great example of what can be achieved [in working towards Christian unity]. 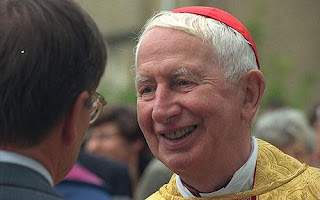 So, if you haven’t read The Divine Milieu, why don’t you?