The world is in one hell of a mess!  It is a real challenge to read a newspaper or watch TV or radio news without falling into a pit of despair.  The other day Pope Francis said something which made me think about the reasons behind the dire state of the world. It was in his homily on the story of Saul and David (see here) The Pope
prayed:

May the Lord grant us the grace of an open heart, of a heart open to the voice of the Spirit, which knows how to discern what should not change, because it is fundamental, from what should change in order to be able to receive the newness of the Spirit. 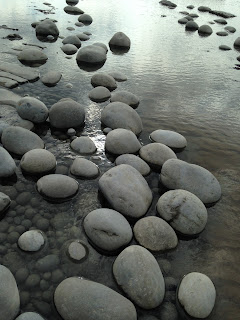 Hard hearts  or cold hearts or hearts  of stone are one of the the main concerns of the devotion to the Sacred Heart. Modern men and  women have closed their hearts to God. Without hearts open to the love of God and lives open to the Holy Spirit there is little hope for humanity.

Pope Francis's words prompted me to think of stone and why scripture refers to hearts of stone.  And this in turn prompted me to think ( of all things) about those lines in the film the Godfather III. As I live near the coast I spend a fair amount of time looking into pebble filled pools, and the words of Cardinal Lamberto  sometimes comes to mind -  when he picks up a stone from a fountain and  says :
' Look at this stone. It has been lying in the water for a very long time, but the water has not penetrated it.” He gives the stone a sharp blow and splits it in two.  Showing it to  Don Michael he observes, “Look. Perfectly dry. The same thing has happened to men in Europe. For centuries they have been surrounded by Christianity, but Christ has not penetrated. Christ doesn’t breathe within them.” View here.


And that is the sadness of it all.  Like the stones in water, human beings in the West have been surrounded by the living waters of Christ, but they have not been penetrated by it.  Their hearts are dry, hard and closed.  Is it any wonder that the world is in such a mess? The devotion to the Sacred Heart is more important to the future of humanity than we can really understand. The only hope for our planet is that we can open our hearts and allow God's spirit to penetrate us and breathe fire into us. 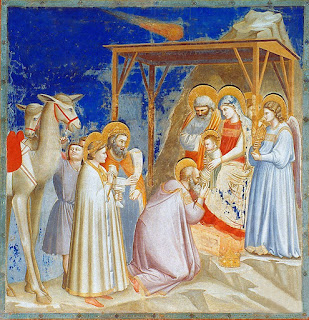 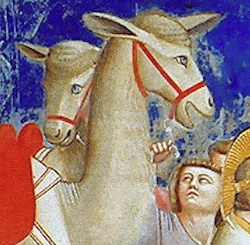 As for me, I think I am more  like the camel boy than the wise men : I find it difficult to respond to the way in which God challenges my assumptions and expectations. Like the boy and the camels I am not wise enough to abandon my assumptions and open my eyes and heart and just simply adore. This year I will try to be less like my alter ego,  the camel boy!
Posted by DWP at 13:03 No comments: 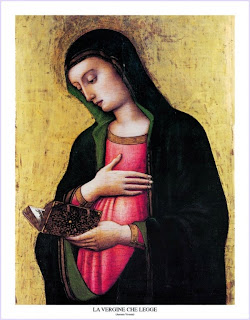 December is always a really busy time for us.  Christmas came and went in a blur.  What is so sad, however, is how so many people just take down on the decorations and put the Christmas tree out and declare Christmas over.  But if Christmas is 'over ' by New Year you never really celebrated it in the first place.  Christmas is not just for Christmas, it is for the whole year!  We keep a little carving of the Holy family by the clock just to remind us of this. The first mass and the first Friday of the month were celebrated together this year - the solemnity of Mary, the Mother of God. As always Mary shows us the way to Jesus. Luke's Gospel,  which was read at mass, reminds us what we must do in the next 12 months: we have to 'ponder all these things in our heart'.  We have a print of  'La Vergine che legge' - the reading virgin - by  Antonio Vivarini (1440-1480) which helps us to remember to ponder the mystery of Christmas in our hearts.  In this year of mercy we pray that the Mater Misericordiae  - our  Mother of Mercy - will help us to keep the fire of Christmas burning in our hearts long after the tree has been re-cycled.