On the road to Emmaus

Last Sunday – Divine Mercy Sunday – brought to mind the declaration of Thomas as he was invited to put his hand into the wound made by the soldiers lance: ‘my Lord and my God’.    The Gospel from Luke (24) on the Third Sunday of Easter is also one that draws us to contemplate the Sacred Heart. 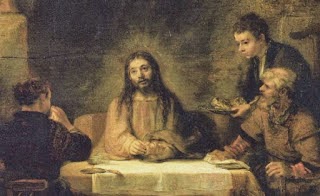 And it happened that, while he was with them at table, he took bread, said the blessing, broke it, and gave it to them. With that their eyes were opened and they recognized him, but he vanished from their sight. Then they said to each other, “Were not our hearts burning within us while he spoke to us on the way and opened the Scriptures to us?” So they set out at once and returned to Jerusalem where they found gathered together the eleven and those with them who were saying, “The Lord has truly been raised and has appeared to Simon!” Then the two recounted  what had taken place on the way and how he was made known to them in the breaking of bread.

In the clearest possible way the gospel tells us that the Eucharist is a profound event: for it is when we receive the bread broken for us, we encounter Christ.   Jesus wants our  hearts to burn  within us.  The Eucharist and the Sacred Heart have long been closely associated, and this gospel helps us to understand why.
Posted by DWP at 18:20 No comments: