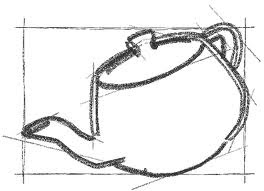 Today Ian and I had our first meeting – in the National Gallery over a nice cup of tea - to discuss the Sacred Heart project. In a short time we covered a good deal of ground. I explained that my interest and devotion to the Sacred Heart was the result of a spiritual experience, but that this also had considerable intellectual consequences in enabling me to formulate ideas which I have on public policy and the relationship between faith and reason in the public square. This will all have to be unpacked in due course. But one thing which became apparent as we talked was that during a recent illness I came to realize that God does not stand outside our pain looking in: he is inside with us and sharing our pain. This is why the Sacred Heart is such a powerful visible symbol of the invisible power of the energy of divine love. As a result of my illness I finally got the whole point of the cross. By pointing to His heart Jesus is reminding us that he suffered for us and suffers with us. The image of the Sacred Heart is therefore the complete embodiment of the love of God: it is about light and love but it is also about dark and pain. It is an image which is asking us to respond to God’s love : it is an image which is supposed to challenge us to live by placing our trust completely in that love. We agreed that this was a good starting point for the project.
Posted by DWP at 18:36 No comments: 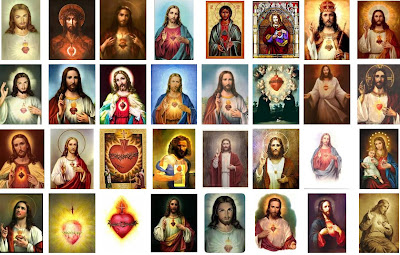 If you google an image of the Sacred Heart you get a return of 1,220,000 images. Here are just a few to look at. These are the images which are most familiar to Catholics throughout the world.

Teilhard was not a great fan of these kind of images, and yet as his great friend and promoter of his ideas during the second Vatican council Cardinal Henri de Lubac noted: “More and more ,for Teilhard, the Heart of Jesus was the ‘fire’, bursting into the cosmic milieu, to ‘amorize’ it. He always carried a picture of the Sacred Heart in his breviary, a link between the invocations he had been taught and those which he now found better nourishment for his prayer. He turned his eyes towards its rays, carrying radiance to all parts [of the universe] ..Thus the concept which was so dear to him and that in the end was supreme in him, of the ‘universal Christ’ was born from ‘an expansion of the Heart of Jesus’ A succinct account of his ideas was found written on both sides of a picture of the ‘radiant heart’ of Jesus which was on his desk. On the front are the words: ‘The God of Evolution’; ‘The Christic , the Trans-Christ’ and Jesus – the Heart of the World, Essence/Motor of Evolution. And amongst the words on the back we find his description of the Sacred Heart as :
The heart of evolution;
The heart of matter;
The golden glow;
The essence of all energy;
Heart of the world’s heart;
Focus of ultimate and universal energy;
Heart of Jesus, heart of evolution, unite me to yourself.

In a letter to Jeanne Mortier he notes where he departs from the conventional interpretation of the Sacred Heart, and suggested that it offers a way forward in meeting the challenge of ‘bringing Christ of today’ to the world of today’:
“You can see it as a suffering ‘Heart’ that needs to be ‘consoled’. Or you can see it as a centre of energy that creates and drives the world: it suffers, indeed, but it is even more a fire, the only fire that can keep in motion a universe that has become reflective.”
Teilhard saw it as a fire that could bring the Christ of today to the world of today. The Sacred Heart was a image for the Christianity of the future as much as of the past. By using the language of the icon I hope and pray that Ian can in some way realize this idea of the Sacred Heart as the centre of divine light and energy: the light and energy of the love of God .
Posted by DWP at 15:50 No comments: 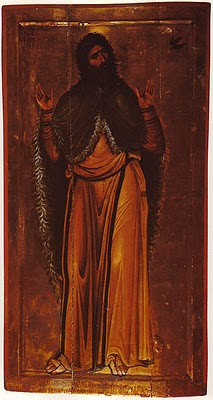 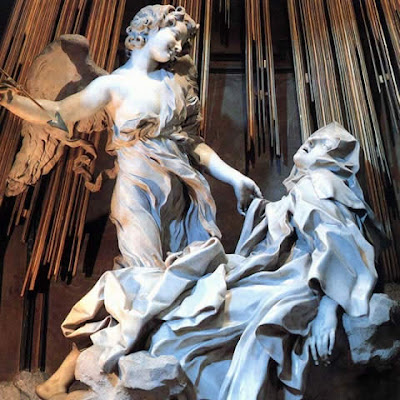 I thought it might be useful to have these two on the blog to illustrate Ian's point in his earlier blog.
Posted by DWP at 12:20 No comments:

The Sacred Heart is a powerful image, with leanings towards sentimentality and violence, neither of which fit within the world of eastern iconography. Christian iconography transcends the violence and gore of, say, the Crucifixion, with the sublime pathos of the Suffering Servant who pour out His life for the salvation of all in an act of pure love. Likewise, iconography is ascetical art, where sentimentality is a 'weak' emotionalism that obscures the transfiguring of our broken and frail humanity into the nobility of the redeemed.

Attempts to create icons of the Sacred Heart which I have seen are unconvincing because, I guess, that these two elements which pervade the classical western devotional imagery haven't been theologically comprehended. If this image is to work iconographically, that is as a piece of liturgical rather than devotional art, then we have to work through some of this.

Iconography is ascetical art, that is it shows reality as transfigured flesh through a process of cutting away the superfluous and emphasising the true nature of a person or event. Iconography is an attempt to portray the reality of a thing 'in itself', not a pseudo-photographic attempt to elevate one moment or view as definitive for the identity of a person or event. Perspective, for example, in iconography stretches things so that you see buildings from various angles at one, giving some sense that space is not the same as existence. Objects are not placed in an illusion of space which the viewer can observe as a voyeur, but arranged to confront the beholder. The imagery as it were escapes the boundaries of the frame and places itself full square before the person who sees it.

Western devotional art works by directly stimulating the emotions of the viewer, moving them to tears and to sighs. The great works of the baroque period are full of swooning virgins, like The Ecstacy of St. Teresa by Gian Lorenzo Bernini (http://web.grinnell.edu/courses/rel/s04/rel115-01/Week7Images/25Mbernini_JPG.html), and are full, sensuous figures. These are very human figures expanded, as it were, in their physicality so as to overwhelm our senses and so to move our whole being and, in the end, to evoke a very physical response which is intensely personal or individual.

Eastern liturgical art works by touching the soul through visual understatement, as for example the icon of the Holy Prophet Elias from St Catherine's monastery on Mt Sinai (http://commons.wikimedia.org/wiki/File:Elijah_Icon_Sinai_c1200.jpg), bypassing the physical senses and appealing to the deepest part of our humanity: our soul or heart. This figure is sublime, the carefully placed lines and the glowing colours creating a sense of the inner person breaking out. The heart is not the seat of our emotions, feelings, but of our' knowing'. As work for liturgy, that is the public, common, communal prayer of the Body of Christ, it avoids stimulating an excess of personal emotion and rather draws the individual into the deeper 'knowing' of God in the Church which bursts forth in the hymn of praise offered up by the whole priestly people of God united around the altar.

The image of the Sacred Heart is a deep spiritual truth, one which speaks of the love of God and especially the Passion as the culmination of the loving self-gift of Christ as the Oblation that brings the redemption of all humankind. We need to unpack this and then re-work it in terms of liturgical art. The difficulty is that the concept is very much a Western one, and we need to first get to the heart of the theology and the roots within the Patristic and Biblical inheritance. The we can begin to recognise the shape, form and colour which would most express that theological base.
Posted by Elias Icons - Ian Knowles iconographer at 12:52 1 comment: