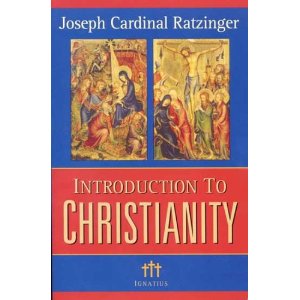 Benedict’s Introduction to Christianity, published in 1968  ( as Joseph Cardinal Ratzinger ) shows clearly the high esteem that he has long had for Teilhard – despite the outstanding official warning attached to his work!    What is perhaps most significant is the first reference to Teilhard in the book in which he notes the differences between Rome and the Christianity of the East.  The East he noted ‘has always sought to see the Christian faith in a cosmic and metaphysical perspective.’   But ‘especially as a result of the ‘stimuli’ from Teilhard de Chardin this ‘idea is beginning to gain currency.  (85)  Later he commends Teilhard for the way he has ‘rethought’ the ideas we find in Paul regarding Jesus as the ‘last Adam’ and as the ‘exemplary man’ who is drawing the whole of mankind to himself’.  This modern interpretation he observes is from the angle of ‘a not entirely unobjectionable tendency towards a biological approach.’(236). He then devotes a few pages explaining the ‘important service’ which Teilhard has given to developing a more modern interpretation of Pauline Christology.  Indeed, he says that, from this perspective Paul’s Christology is ‘rendered comprehensible, even if the vocabulary employed in rather too biological’. He then provides a concise summary of what is essentially Teilhard’s argument.  An argument that was not allowed to be published in his lifetime.   Benedict observes that Christians believe  Jesus is the man :

..in whom – on the biological plane- the next evolutionary leap , as it were has been accomplished; the man in whom the breakthrough out of the limited scope of humanity, out of its monadic enclosure, has occurred; the man in whom personalization and socialization no longer exclude each other but support each other; the man in whom perfect unity – “The body of Christ’, says St.Paul, and even more pointedly ‘You are all one in Christ Jesus’- and perfect individuality are one; the man in whom humanity comes into contact with its future and in the highest extent itself becomes its future, because through him it makes contact with God himself, shares in him, and thus realizes its most intrinsic potential.   From here onward faith in Christ will see the beginning of a movement in which dismembered humanity is gathered together more and more into the being of one single Adam, one single ‘body’  – the man to come.  It will see him in the movement to that future of man in which he is completely ‘socialized’, incorporated in one single being, but in such a way that the individual is not extinguished but brought completely to himself. (239)

This summation of a teilhardian account of St Paul (and Johannine theology ) is one which I think perfectly captures what Teilhard spent a life-time writing about.  Benedict subsequently references Teilhard on ‘complexification’ (304) and later his ideas about understanding humanity in a cosmic context. (319)

This endorsement of Teilhard's contribution to modern Catholic thinking about Christ as  an 'evolutionary leap' and as the omega point towards which the universe is converging by Benedict  (see pp 240- 242) should go some-way to dispel the idea that Teilhard is ‘unorthodox’ or ‘un-Catholic’!    From Benedict's point of view he is just 'too biological' and not theological enough.  And that is fair comment.  Teilhard himself was no theologian: he was a priest who saw science as an integral part of his vocation as a priest. He never - for one moment  - thought of himself as a theologian and therefore used a language  which did not sit easily alongside theological discourse.  But as is evident in this book, one of the leading theologians of his time later to become Pope,  actually endorses the approach  Teilhard takes to St. Paul and St. John: it is just a bit too biological for his taste.    The soundness of his core 'theology', however , is crystal clear when we read it through the lens of his love of the Sacred Heart. - that is to say through our icon!  As we reflect upon his love of the Sacred Heart it becomes apparent that Teilhard's  Sacred Heart  is not only compatible with Church teaching and tradition, it serves to modernize it and make it more relevant for this century.