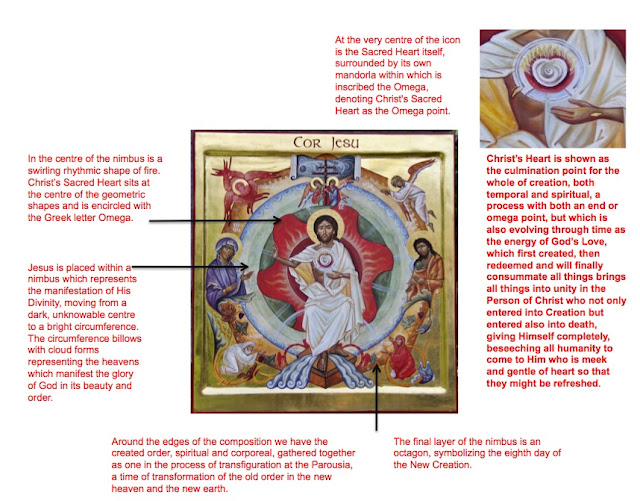 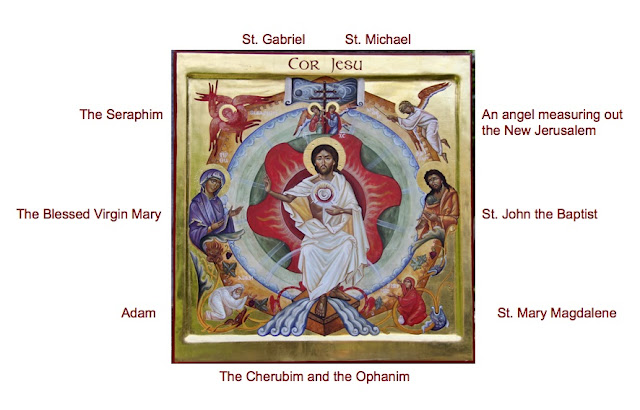 Lettering  in the icon.


Unlike all the other figures in the icon Christ and Mary have their names written in Greek above them. And in the centre of the icon we see the Greek letter Ω  - omega -  to represent Christ as the ‘Omega point’  – the focal or end point of all creation – towards which all things are converging and becoming one in Him.


Above Christ Omega we find the letters IC and XC.   These represent the first and last two  letters of  the name of Jesus Christ in Greek: ΙΗΣΟΥΣ   ΧΡΙΣΤΟΣ  = ΙΣ   ΧΣ

In medieval Greek it was common to use the so-called ‘lunate sigma’ rather than ‘Σ’.  (Lunate because it is like a crescent moon.)    Hence IC  XC.  It is an iconographic convention for the letters to be split into two pairs. Above the letters (the titlos) we also see a line or bar, to indicate that this is a holy name.

Above  the image of Mary, the Mother of God,  we see the letters Μρ and Θύ, which is a shorthand way of writing  Μήτηρ του Θεού – (Mētēr tou Theou) Mother of God in Greek -   using the first and last letters of Mother and God. Again, they have a bar above them to signify that they are holy names.


The icon also has 'Cor Jesu' - in Latin-   to indicate that this is an icon which should be read as an image of the Heart of Jesus.


So in language terms the icon seeks to combine both Roman and Greek traditions.