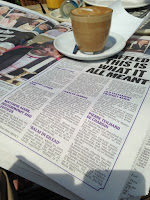 Well, there are plenty of things I thought I would never see.  Pigs flying, or  a politician admitting he /she got things wrong. I am not a Daily Mail reader, but I had a bit of a shock when I read a piece on Teilhard in the said paper this morning.  The coverage of Archbishop Michael Curry's  sermon at the wedding of the year has led to the most remarkable reaction as to 'who is this Jesuit priest'?   Curry quoted, of course, one of the most famous passages from Teilhard, and used it to good effect.  Read the full text, here.  The section on Teilhard had this to say: 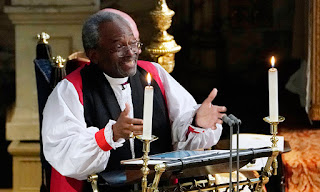 'French Jesuit Pierre Teilhard de Chardin was arguably one of the great minds, great spirits of the 20th century, a Jesuit Roman Catholic priest. A scientist, a scholar, a mystic. In some of his writings he said from his scientific background as well as his theological one, in some of his writings he said, as others have, that the discovery or invention or harnessing of fire was one of the great scientific and technological discoveries in all of human history. Fire to a great extent made all of human civilization possible. Fire made it possible to cook food and to provide sanitary ways of eating, which reduced the spread of disease in its time. Fire made it possible to heat warm environments and thereby made human migration around the world a possibility, even into colder climates. Fire made it possible, there was no Bronze Age without fire, no Iron Age without fire, no Industrial Revolution without fire. The advance of science and technology are greatly dependent on the ability to take fire and use it for human good.
Anybody get here in a car today? An automobile? Nod your head if you did -- I know there were some carriages. But those of us who came in cars, fire, the controlled, harnessed fire made that possible. I know that the Bible says, and I believe it, that Jesus walked on water. But I have to tell you that I didn't walk across the Atlantic Ocean to get here. Controlled fire in that plane got me here. Fire makes it possible for us to text and tweet and email and Instagram and Facebook and socially be dysfunctional with each other. Fire makes all of that possible.
And de Chardin said fire was one of the greatest discoveries in all of human history. And he then went on to say that if humanity ever harness the energy of fire again, if humanity ever captures the energy of love, it will be the second time in history that we have discovered fire.'