The Sacred Heart and the 'God shaped space' 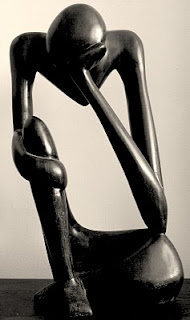 Reflecting on the Sacred Heart of Naur in the spring sunshine of North London today something came to mind, which had been somehow buried for many months. And you don’t need a PhD in analytical psychology to figure out why. When I was ill I seemed to attach myself very strongly to some wooden objects. Your image of fire and water must have prompted me to think about wood as another sacred form of matter. And that is when I recalled my attachment to wood during the darkest days and nights of my life. The first object was a cheap wooden rosary that I had bought in Mexico. I would use it to say the rosary. And it went with me to hospital. The other was a simple wooden cross given to me by my wife years ago: I think it is called a ‘holding cross’. Made from olive wood from the Holy Land where you are now and I think it was made in Bethlehem. I have treasured this for some time and take it on all my travels. So, it was appropriate that it would accompany me on this particular journey. I would hold it tightly especially when the pain was very bad, and I would frequently wake up with it still gripped in my hand. Just holding this piece of cross shaped wood was, perhaps, the most powerful of all prayers, as it seemed to enable me to pray without words: in pain I prayed with wood rather than words. The third wooden object which was important to me was a piece of African carving that I had bought a few years before in an Oxfam shop. ( See picture. ) One night I could not sleep and I got up to walk around downstairs. I walked up and down and then noticed the carving which was caught by the light from a street lamp that shone through the window. And then that well-known line from Blaise Pascal came to mind: "Dans le coeur de l'homme il y a un vide et ce vide a la forme de Dieu et seul Dieu peut le remplir." ( In the heart of man there is a vacuum in the shape of God which only God can fill.) In that moment I realized that the carving was me – indeed every man and woman that has ever been and will ever be. We spend so much of our existence trying to fill that space being contemplated by the wooden ‘thinking man’: after all nature abhors a vacuum. We try filling it with money, power, sex, food, drugs, drink, TV, facts, knowledge, technology: the list is as long as life itself. As I looked at the carving I saw what I had tried to fill that ‘God space’ in my heart with. And I had a profound sense of utter despair as I contemplated how much of my life had been about filling that space illuminated by the street light. I had spent all my life filling that space up, but I finally realized that there was still a vacuum: despite all that I had done and learnt and achieved, and all the love that I had given and received, my heart was still empty and incomplete. In truth, I did not fully understand what I was thinking in the painful early morning all that time ago. But, I really believe that (as Teilhard argued) the Sacred Heart - which you have so beautifully depicted - is God’s way of trying to tell us that for us to evolve individually and as a species we have to realize that the space in the carving is the space which only the Sacred Heart can fill. I realize now that my journey to the Sacred Heart began as I tried to wrestle with the feelings stirred up by that wooden carving.
Posted by DWP at 15:30