Today it reportedly snowed in Amman, and here in Naur it was freezing cold, and icy rain. Could have been in the UK! However, it meant that the workman didn't stay long today so I was able to work in relative peace and quiet.

I was trying to work out the best combination of colours for the mandorla. As these large circles are very dominant it is important to get that right. There are various combinations, either reds and yellows or greens and blues mostly. The sanctuary is not so large, and I want to give a sense of space; I also want the altar and tabernacle to be visually central as they are the main loci for the liturgical space. The painting needs to grace the sanctuary and enhance its meaning as the point of union between heaven and earth where the Sacrifice of Christ is offered.

The circles of the nimbus have had an interesting effect of opening up the apse roof almost as if it were a dome; while the proportions of the figure of Christ give a sense of space upwards and outwards. As for colour, the original idea was for using real gold leaf but that would have costs literally thousands so that went, but I used a very watered down raw sienna which when you let the sediment settle leaves a lovely golden hue pigment. This applied as a wash gives a nice, light, desert tone, something which I am trying to emulate given the proximity of the desert here; it is also something the priest here has expressed his interest in.

Given the golden yellow ground, blueish green makes a nice compliment to it, and the green sets off the red robe of Christ nicely too. So using washes I am trying to get a sense of expanding Divine energies, from the Unknown darkness to the brilliance of transfiguration and theosis, all from the Sacred Heart which will be in gold leaf. 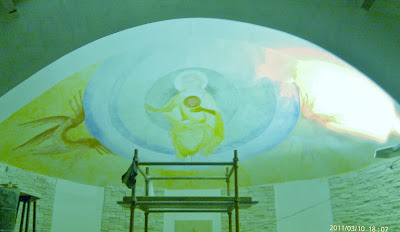 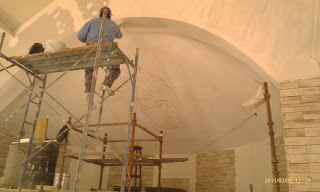 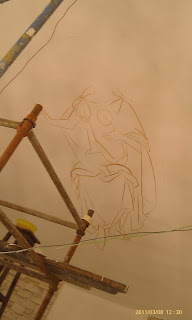