The Sacred Heart and the Eucharist - as a FURNACE 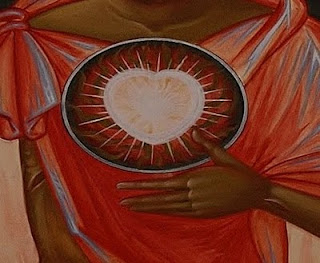 Ian, having spent a little more time reflecting on the ‘Sacred Heart of Naur’, I find myself returning once again to the relationship between the Sacred Heart and the eucharist. For me the image strongly evokes the eucharist . It is interesting to note that Teilhard has been rehabilitated in the church in recent years in terms of what he has to say about the eucharist. I am not sure if you are aware of this, but it is a wonderful coincidence that you have evoked the eucharist at the centre of the centres. Both John Paul II and Benedict XVI have been forthright in their praise for Telihard’s Mass on the World in this respect. (READ HERE) John Paul, for example argued that: "The Eucharist is celebrated in order to offer on the altar of the whole earth the world's work and suffering in the beautiful words of Teilhard de Chardin," (Gift and Mystery, 73) Whilst Benedict gives us a neat summary of the Mass:

Teilhard went on to give a new meaning to Christian worship: the transubstantiated Host is the anticipation of the transformation and divinization of matter in the ‘ Christological ‘fullness’. In his view,the Eucharist provides the movement of the cosmos with its direction: it anticipates its goal and at the same time urges on.’ (Ratzinger, Spirit of the Liturgy, 29)

I am continually struck when reading the Mass on the World of how, for Teilhard, the eucharist and the Sacred Heart are one and the same. At the conclusion of the mass Teilhard offers a prayer. I think that this prayer well describes how I feel as a look at the Sacred Heart of Naur and how we should think about our icon. The mass a whole should be read and prayed, but here let me just draw your attention to a few passages in the prayer section.


PRAYER
Lord Jesus, now that beneath those world-forces you have become truly and physically everything for me, everything about me, everything within me, I shall gather into a single prayer both my delight in what I have and my thirst for what I lack; and following the lead of your great servant I shall repeat those enflamed words in which, I firmly believe, the Christianity of tomorrow will find its increasingly clear portrayal:
‘Lord, lock me up in the deepest depths of your heart; and then, holding me there, burn me, purify me, set me on fire, sublimate me, till I become utterly what you would have me be, through the utter annihilation of my ego.’
‘Lord.’ Yes, at last, though the twofold mystery of this universal consecration and communion I have found one to whom I can wholeheartedly give this name. As long as I could see — or dared see — in you, Lord Jesus, only the man who lived two thousand years ago, the sublime moral teacher, the Friend, the Brother, my love remained timid and constrained. Friends, brothers, wise men: have we not many of these around us, great souls, chosen souls, and much closer to us? And then can man ever give himself utterly to a nature which is purely human? Always from the very first it was the world, greater than all the elements which make up the world, that I was in love with; and never before was there anyone before whom I could in honesty bow down. And so for a long time, even though I believed, I strayed, not knowing what it was I loved. But now, Master, today, when though the manifestation of those superhuman powers with which your resurrection endowed you you shine forth from within all the forces of the earth and so become visible to me, now I recognize you as my Sovereign, and with delight I surrender myself to you.
How strange, my God, are the processes your Spirit initiates! When, two centuries ago, your Church began to feel the particular power of your heart, it might have seemed that what was captivating men’s souls was the fact of their finding in you an element even more determinate, more circumscribed, than your humanity as a whole. But now on the contrary a swift reversal is making us aware that your main purpose in this revealing to us of your heart was to enable our love to escape from the constrictions of the too narrow, too precise, too limited image of you which we had fashioned for ourselves. What I discern in your breast is simply a furnace of fire; and the more I fix my gaze on its ardency the more it seems to me that all around it the contours of your body melt away and become enlarged beyond all measure, till the only features I can distinguish in you are those of the face of a world which has burst into flame.
...(Thus, the devotion of the Sacred Heart had to be understood as still EVOLVING. That is, from being a devotion focused on the physical body of Jesus to being focused on a ‘furnace of fire’ at the centre of all creation illuminating and inflaming all that exists. I think your Sacred Heart captures this for me.
When Teilhard sees the Sacred Heart as the image of and for the Christianity of tomorrow he means this: ( I break it up into lines so we can see more clearly the poetry.)
Glorious Lord Christ:
the divine influence secretly diffused and active in the depths of matter,
and the dazzling centre where all the innumerable fibres of the manifold meet;
power as implacable as the world and as warm as life;
you whose forehead is of the whiteness of snow, whose eyes are of fire,
and whose feet are brighter than molten gold;
you whose hands imprison the stars;
you who are the first and the last,
the living and the dead and the risen again;
you who gather into your exuberant unity every beauty, every affinity, every energy, every mode of existence;
it is you to whom my being cried out with a desire as vast as the universe, ‘In truth you are my Lord and my God.’
‘Lord, lock me up within you’: …I beg you, Lord, in the name of all that is most vital in my being, to hearken to the desire of this thing that I dare to call my soul even though I realize more and more every day how much greater it is than myself, and, to slake my thirst for life, draw me — through the successive zones of your deepest substance — into the secret recesses of your inmost heart.

It is strange, that although I have known this Mass since I was in my teens, it was only recently - as I mentioned to you in an email - that I actually had the experience of communion as fire. Another example of thinking and feeling as two very different forms of knowing. The moment one begins to feel as if the priest is placing fire on your hand or in your mouth ones experience of the eucharist is wholly transformed. You are not eating bread, so much as consuming fire.

‘Lord, lock me up in the deepest depths of your heart;
and then, holding me there, burn me, purify me,
set me on fire, sublimate me,
till I become utterly what you would have me be,
through the utter annihilation of my ego'

Thus , Teilhard's prayer becomes the prayer for a 'Christianity of tomorrow' drawn from the deep wells of yesterday's Christianity. ( He does not tell us the source of this prayer - but it sounds very much like St John Eudes.)
(Tu autem, Domine mi, include me in imis visceribus Cordis tui. Atque ibi me detine, excoque, expurga, accende, ignifac, sublima, ad purissimum Cordis tui gustum atque placitum, ad puram annihilationem meam.)

Your picture reminds us that, like Moses and Isaiah, in the eucharist we encounter the Sacred Heart that consumes but does not destroy . A fire that purifies and completes us.
Posted by DWP at 12:42