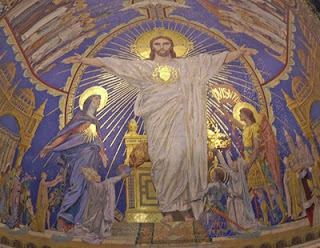 I first visited Montmatre when I was in my first year at university. ( Or it may have been the summer before I went up?) I had gone to Paris to help a mate look for his girl friend. He had met her in London and she had moved to Paris to work. We camped in the Bois de Boulogne and went out looking for her and despite all the odds and lack of much information we found her. Three is a crowd and so I left them to bill and coo and went off to explore Paris. There were two things I wanted to see in Montmatre: the Church of Saint Peter which had been a ‘temple of reason’ during the revolution and, of course, the great basilica of Sacré-Coeur. ( I also wanted to look cool, drink coffee and read Camus in a café. ) I shall never forget the feeling of awe that I experienced as I looked up at the great mosaic above the high altar. And the last time I was there with my wife pour un ‘week-end’ a few years ago I still uttered a ‘wow’ equal to that of my youth. The famous mosaic by Luc-Oliver Merson was completed in 1922 and marked ( I believe) a big step forward in the depiction of the Sacred Heart. This was not the Sacred Heart of the Gesu in Rome: but it is very much the Sacred Heart which Teilhard was to describe. I have no idea if Teilhard ever saw Merson’s work. I have not found any reference to it anywhere in his writings, so perhaps he had, but chose not mention it. That really does not matter. What matters is that the apse ( or cul de four) in the Sacré-Coeur shows how the Sacred Heart could evolve in the kind of direction suggested by Teilhard. When I saw I Christ in Majesty again a few years ago some long forgotten words of Teilhard from his Le Milieu Divin flooded back to me ( I quoted them in an earlier blog, but here they are again):

Disperse, O Jesus, the clouds with your lightning! Show yourself to us as the Mighty, the Radiant, the Risen! Come to us once again as the Pantocrator who filled the solitude of the cupolas in the ancient basilicas! Nothing less that this Parousia is need to counter-balance and dominate in our hearts the glory of the world that is coming into view. And so that we should triumph over the world with you, come to us clothed in the glory of the world.


It also brought to mind his words in Writings in Time of War, where he says:

You at the Centre at which all things meet and which stretches over all things so as to draw them back into yourself: I love you for the extensions of your body and soul to the furthest corners of creation through grace, through life, and through matter’.

As we gaze up at the magnificence of the apse in Sacre Coeur are we not a long way removed from the painting of Batoni? Of course we are. The whole basilica is a Byzantine inspired statement which sets out to distance itself from the baroque - and broken - past. We are no longer in Rome: we are in Byzantine France! Not in an ancient basilica mentioned by Teilhard but in a basilica completed in the 20th century ! Luc-Oliver Merson’s apse appears to my eyes very much in tune with Teilhard. The image was clearly still evolving by the 1920s, but for the most part the images of the Sacred Heart that were most common was that of the Batoni variety. But here we find an image which is powerfully evocative of Teilhard. There is Christ with his vast all embracing arms stretching out and touching the whole of the universe. From his golden glowing heart streams beams of light. Every thing is converging towards him in the final Parousia. This is the Sacred Heart as the King of creation. He is the centre of centres which extends throughout the universe. He is triumphant and is clothed in glory. He extends himself to unite the universe with heaven: father, son and holy spirit.

Merson’s Sacred Heart is the Sacred Heart which had been dedicated to the whole world. This is the Sacred Heart of the universe: Christ in Majesty, Christ the King and Christ Omega. But sadly, I cannot discern much by way of this mosaic having any significant influence on the popular image of the Sacred Heart. (Although statues do seem to evolve as they incorporate more of a sense of Christ the King.) As an evolutionary step it did not seem to move the image very far. Batoni type images were to remain the dominant representation for the rest of the century. And Luc-Oliver Merson, having been commissioned to undertake such a prestigious work of art, died two years before it was completed. And this new vision perhaps died with him. It would be interesting to trace the influence of this work - but that may be another blog.

It was, I think, this great work in the Sacre Coeur which convinced me that an icon - ‘a cupola in a basilica’ - would be better able to capture this feeling I experienced all those years ago than a ‘western’ representational picture. From then on when I thought of the Sacred Heart I wanted to see and feel it was was Sacre Coeur image, not the Botoni types that i tried to focus on. Nothing less than the Parousia! The Sacred Heart of Jesus, clothed in the glory of creation and at the centre of a convergent universe folding around him.

Sacre Coeur is also important for another dimension of this project. The piece at start of this blog which was published in the Catholic Herald in 2010 points out that the Sacred Heart is a VERY political devotion. Perhaps - indeed no perhaps - the most political of all Catholic devotions. Sacre Coeur was itself a VERY political statement. The blog will return to this in due course. BUT because of the controversial position of the basilica in French political history, it is not so surprising that the 'Byzantine' image was not disseminated or popularised like the 'Roman' image. I can find no evidence of prints in circulation.
Posted by DWP at 07:47