I found David's observations about the mosaic of the Sacred Heart in Sacre Coeur very interesting. I spent a little time taking a closer look at the imagery but my conclusions are rather different.

I haven't been to Sacre Coeur for several years, but remember being struck by its grandeur, not least it being stuck right on top of the hill dominating the surroundings. I also remember the Presence of Christ which you can almost taste. The Perpetual Adoration of the Blessed Sacrament sets the tone of the spiritual space, as I sense is true of all Catholic buildings (compare Westminster Abbey with Westminster Cathedral or Notre Dame for example, where the former has, for me, a rather desultory, forlorn feeling while the later two while still being thronged with tourists manages somehow to have a 'freshness' and an 'aliveness' difficult to describe except as the spring air you find on a walk in the Alps.

So, yes, Sacre Coeur has a special Presence, but I don't know if the art is really a part of that. It is in that Catholic style peculiar to late 19th century early 20th century France, full of triumphalist bravado. Byzantine art was an imperial art style, and you can see why it would appeal to the imperial Catholics of France, when Catholicism experienced something of a 'miraculous' revival following on from Lourdes, but also battling against the forces of secularism, masonry, Gallicanism and many other non or anti Catholic 'isms' that were current in France at the time. Place this in the context of the rise of Ultramontanism, and the precarious position of the Papacy following the various democratic revolutions in the Papal States and across Catholic Europe and South America, and this rather overbearing style finds its place.

But I am not sure it is really a liturgical style. It isn't a style to bring you to prayer, but just to impress, at best to make you think. This image of the Sacred Heart is all about a power that is dominating, and that is a style of power which Jesus warned his disciples about, a wordly power that 'lords it over' others. This is an imperial, nationalistic style where the glory is of Catholic France. Byzantine art, while the art of an imperial culture, transcends that by not being itself a wordly art form, but one which challenges by transcending the material and political world by an eternal vision of what lies at the heart of all things.

From the bits and pieces I have read about Teilhard, his sense is of the vulnerability of an evolutionary way of understanding God at work, of the provisionality, mistakes, and gradualness of this is far from being a part of Merson's image. The glory and wonder of the world of matter and its immense energy is not an imperial vision, but something much grander. It isn't about external forces dominating others, but of the wonder of Truth manifesting itself almost irresistibly in a complex unity that manifests its wonder in myriad of interconnected forms eternally, 'unto the ages of ages'. It is a humble power, weak as well as strong, vulnerable as well as magnificent. The image in Sacre Coeur seem to me far, far from that. There is no vulnerability there at all; it is lofty and overbearing, in many ways a worldly art using spiritual themes for a nationalistic agenda (note the prominence of St Joan of Arc for example and the big papal tiara). In short, I find it soul-less and spiritually superficial, even if impressive and even awe inspiring in the sense that I marvel at the Eiffel Tower or the Arc de Triomphe.


But perhaps I am missing the idea of the Omega point? Is the image in the basilica the end point, the point where all is achieved in Christ, evolution reaching its transcendent moment? Well the image could certainly reflect something of that, but if it is the energy of love which is at the heart of all things, then shouldn't this  be a compassionate image? For me it is reminiscent of the images of mechanical human brute force so beloved by the fascists and communists, a figure to rival those ideologies on their own terms. The face is so impersonal, not just a bit fierce as in many Pantocrator images, but distant which is the very antithesis of the icon. It is also very 'wordly', the spiritual world of angels and saints, is depicted in a very earthly style, for example the light is reflected light, not an interior glow, not a furnace that glows bright within.

The icon engages with the eyes of the Lord. Here the figure is impersonal to us, a distant deity to be worshiped from afar, yes with fervour but not with intimacy. The Mother of God is diminutive,pleading but not as in the icons where she humbly stands beside her Son raised into His Divine Dignity, intimate with him. Here, then, there is no sense of theosis. Christ presides over all but in a way which excludes us, rather than makes us integral to it. 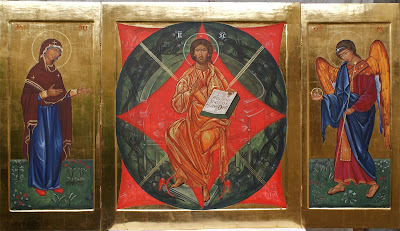 So, sorry David to be so critical of an image that speaks so strongly to you, but  I guess we are diverging from each other a bit here, which isn't a bad thing per se as it means we can explore these images more rigorously and mine their meaning more sharply. I await your reply with interest!
Posted by Elias Icons - Ian Knowles iconographer at 07:43