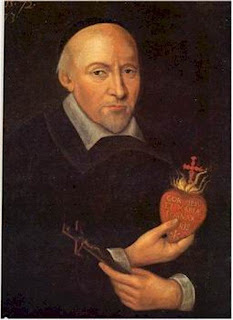 The devotion to the Sacred Heart has a large body of prayer to draw upon. In thinking about an icon we should therefore reflect on the prayer of the Saints most closely associated with the devotion. Significantly, they are all French. St John Eudes, St Margaret Mary; and St Claude la Colombière. We begin with St John Eudes.

The form of the devotion we associate with the Sacred Heart begins with Saint John Eudes (1601-1680) . Pius X proclaimed him the Father and ‘Doctor’ of the devotion. You can read his book on the Sacred Heart HERE. Significantly, St John Eudes was to promote the twin devotion to the Sacred Hearts of Jesus and Mary. Teilhard, it appears was primarily concerned with just the Sacred Heart of Jesus – although he was, of course, wholly devoted to the Blessed Virgin. St John drew upon the private prayers and practices which had evolved in the preceding centuries – in particular from St Bonaventure, and St Gertrude as well as many others. His efforts to gather and refine these earlier forms of devotion were responsible for the devotion spreading throughout France and the Catholic world as a whole His work in promoting the devotion was, therefore prior to that of Saint Margaret Mary.

As his writings form the foundational texts of the devotion, it is well at this stage in the process to take a little time and reflect on his thoughts and prayers.
Posted by DWP at 11:16