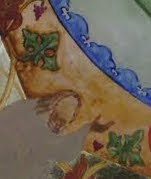 The vine motif in the icon reminds us, of course, that Christ is the 'true vine'. It is this true vine which is the subject of a book written in the 13th century, the Vitis Mystica the mystical vine– which has a defining role in the history of the Sacred Heart. In it we find many references to the heart of Jesus as well as to the idea of love as fire. (READ IT HERE ) I thought that it was by Saint Bernard. But, it turns out that modern scholars now attribute it to none other than Dr. Seraphicus – Saint Bonaventure! So this part of the icon links us back to the Franciscan tradition but also prompts us to reflect upon the fact that the Sacred Heart has its roots deep in the history of Christianity – long before St Francis de Sales, St John Eudes and Saint Margaret Mary in the 17th century. In other words, the Sacred Heart as a focus of mystical devotion has been evolving – growing like a vine - over many hundreds of years. When we meditate on the Sacred Heart we therefore are in communion with the saints, mystics and scholars who have journeyed to God through the heart of Jesus. There can be no doubt that Teilhard saw the Sacred Heart qua Christ Omega - the Universal Christ - as part of that evolution: it was another shoot springing from the true vine. The vine with its grapes also enables us to reflect on an aspect of the Sacred Heart which was absolutely central to Teilhard’s spiritual life: the Mass and the Eucharist.
Posted by DWP at 11:50