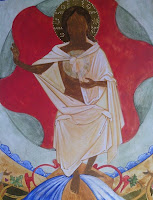 Ian, as a looked at these latest pictures of the icon this morning the words from Teilhard's famous Mass on the World (READ FULL TEXT HERE) flashed into my mind! The swirling red mandorla really captures the fire of the Sacred Heart. As I think about the design it seems that you have elegantly and simply 'de-constructed' the Sacred Heart image: you have unpacked its underlying theology but also captured its poetry ( if that is the right word!) In brief, you have made the Sacred Heart more open to my heart!

From the Mass on the World


FIRE OVER THE EARTH
..In the beginning there were not coldness and darkness: there was the Fire. This is the truth. So, far from light emerging gradually out of the womb of our darkness, it is the Light, existing before all else was made which, patiently, surely, eliminates our darkness. As for us creatures, of ourselves we are but emptiness and obscurity. But you, my God, are the inmost depths, the stability of that eternal milieu, without duration or space, in which our cosmos emerges gradually into being and grows gradually to its final completeness, as it loses those boundaries which to our eyes seem so immense. Everything is being; everywhere there is being and nothing but being, save in the fragmentation of creatures and the clash of their atoms. Blazing Spirit, Fire, personal, super-substantial, the consummation of a union so immeasurably more lovely and more desirable than that destructive fusion of which all the pantheists dream: be pleased yet once again to come down and breathe a soul into the newly formed, fragile film of matter with which this day the world is to be freshly clothed....
..PRAYER
Lord Jesus, now that beneath those world-forces you have become truly and physically everything for me, everything about me, everything within me, I shall gather into a single prayer both my delight in what I have and my thirst for what I lack; and following the lead of your great servant I shall repeat those enflamed words in which, I firmly believe, the Christianity of tomorrow will find its increasingly clear portrayal:
‘Lord, lock me up in the deepest depths of your heart; and then, holding me there, burn me, purify me, set me on fire, sublimate me, till I become utterly what you would have me be, through the utter annihilation of my ego.’
Tu autem, Domine mi, include me in imis visceribus Cordis tui. Atque ibi me detine, excoque, expurga, accende, ignifac, sublima, ad purissimum Cordis tui gustum atque placitum, ad puram annihilationem meam.

…your main purpose in ..revealing to us .. your heart was to enable our love to escape from the constrictions of the too narrow, too precise, too limited image of you which we had fashioned for ourselves. What I discern in your breast is simply a furnace of fire; and the more I fix my gaze on its ardency the more it seems to me that all around it the contours of your body melt away and become enlarged beyond all measure, till the only features I can distinguish in you are those of the face of a world which has burst into flame.
……Glorious Lord Christ: the divine influence secretly diffused and active in the depths of matter,
and the dazzling centre where all the innumerable fibres of the manifold meet;
power as implacable as the world and as warm as life;
you whose forehead is of the whiteness of snow,
whose eyes are of fire,
and whose feet are brighter than molten gold;
you whose hands imprison the stars;
you who are the first and the last,
the living and the dead and the risen again;
you who gather into your exuberant unity every beauty, every affinity, every energy, every mode of existence;
it is you to whom my being cried out with a desire as vast as the universe, ‘In truth you are my Lord and my God.’

I have put in bold the words about his belief that the 'Christianity of tomorrow' would be portrayed in terms of the Sacred Heart. This is an important statement. The Sacred Heart for Teilhard is a powerful synthesis of the Christian faith which enables ' our love to escape from the constrictions of the too narrow, too precise, too limited image of [Christ] we ..[fashion] for ourselves.'
The message of the Sacred Heart for us today is the same as always: that humanity has to be less self-centred and focused on 'me, me, me'. Only by focusing on God, who is love, can we hope to become 'meek and gentle of heart'. So in meditating on the Sacred Heart we should all pray:

‘Lord, lock me up in the deepest depths of your heart;
and then, holding me there, burn me, purify me, set me on fire,
sublimate me,
till I become utterly what you would have me be,
through the utter annihilation of my ego.’
AMEN
Posted by DWP at 09:02