Adam and the Sacred Heart 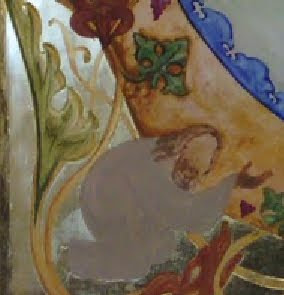 The figure of Adam is also a window into another dimension of the Sacred Heart - as Christ Omega , the universal Christ. Ian describes the image thus:

Entwined on the left is Adam prostrating himself, representing the whole of humanity in need of redemption, the weary and heavy of heart whom Christ bids come to Him…

In Adam we also seek mercy and forgiveness for all the times when we have lanced the very heart of God by not retuning all the love he gives to us. Mercy for all the times when His heart has called to our Heart and we have, like Adam, hidden from God. Thinking of this recently I recalled a time when I felt so hurt and wounded when someone to whom I had given so much help and support returned my kindness with the complete opposite. The Sacred Heart should make us think of how we -poor children of Adam - are capable of hurting the very (human )heart of the creator by our refusal to return His love for us. Jesus - Christ Omega, the Second Adam - offers his heart to us and yet individually and as a species we all too often return His love with hate and indifference. In the Sacred Heart we see God' s vulnerability to human sin.

How does Adam stand in relation to the heart which calls to him? In Jesus God has a human heart. A heart which is the product of a long evolutionary process. Adam represents us, the species Homo Sapiens. His presence in the icon serves to remind us that for Teilhard God is a God of evolution. When we reflect on Christ Omega and the Sacred Heart at the centre of the cosmos we recall what Teilhard wrote on his Sacred Heart card found on his desk.


In Adam we see ourselves and understand the universal Christ which he kneels before seeking love and mercy. The Sacred Heart: the focal point - the Omega point - of a cosmic vortex which is pulling the children of Adam towards union with the Trinity. However, it must be said that the very presence of Adam in this icon raises some major issues in relation to Teilhard. Adam was the source of a good deal of trouble for Teilhard. For as a paelontologist he could not accept that we should see Adam in the literal biblical sense. Even now in the 21st century there are some people who reject evolution as being wholly incompatible with scripture. For such people, of course Teilhard is seen as a dangerous and malign figure in the history of the Catholic Church. So is not too difficult to understand how - in the 1920s - the very idea of evolution was believed to be subversive and irreligious. Thus Teilhard was a real problem for his order and for Rome. Teilhard’s idea that we should see Adam and original sin through an evolutionary perspective was seen as VERY dangerous. As was his view that the Incarnation was a cosmic event and not about the sin of Adam in a literal sense.

What we see in the image of the Sacred Heart in the icon is best understood in the context of St. Paul.

In this Pauline sense rather than a literal sense, Adam represents the ‘old man’: humanity as it was prior to the Incarnation. Jesus is the new Adam: an entirely new stage or phase in the history of our species and of creation. In Adam we are also drawn into the purpose of the Incarnation. From the beginning, long before Adam’s fall Christ came into existence to express the Father’s love of his creation. Before Adam was, before human beings walked this earth Christ was predestined as the centre of the universe which would draw all things into himself. Christ is ALPHA and omega, the beginning and the end point of creation.

Teilhard would have smiled to see Adam in an icon of the Sacred Heart, because Adam gave him quite so much hurt and pain in his life. For Teilhard the Incarnation could not be understood simply in terms of the fall of Adam and his sin. And this caused problems for him with his order and with Rome. His love of a Christ for whom the cosmos itself was brought into being could not be understood as simply a response to the fall of Adam. In this regard he was very much in tune with the Franciscan school of theology. For Teilhard as for the great Franciscan theologian John Dun Scotus, the Incarnation was a cosmic event which was independent of the fall of Adam. Although Teilhard was a Jesuit, in many ways he was much closer to the Franciscan school. Indeed, I think that is one way to understand his way of looking at the Sacred Heart. He is a Jesuit who is looking through a Franciscan lens. However, rather like the character of Monsieur Jourdain in Moliiere’s Le Bourgeois gentilhomme who suddenly realizes he has been speaking prose all his life, it was not until the 1940s that he realized that he had been speaking Franciscan all his life. Whilst in Peking he met with Gabriel Allegra who told him all about John Duns Scotus and enlightened him as to what he had in common with the Franciscan belief in the ‘absolute primacy of Christ’ – what Teilhard refers to as the Pleroma.
Thus when we look at the figure of Adam we are looking through a window into a way of seeing Christ which actually predates Teilhard by many hundreds of years. As Teilhard says to the Venerable Gabriel Allegra: ‘Although traveling different paths, we tend towards the same goal, that is the source of light and fire which is le Grand Christ.’ ( Conversatiosn with Teilhard, p105) They both make a reference to the Sacred Heart in this regard.

Allegra. Pere Teilhard, your expression ‘ the source of light and fire’ reminds me of another expression of St. Francis of Assisi: ‘ignita et melluflua vis amoris Dei’ ( the fiery and sweet force of the love of God). Don’t you think that this is expression is very appropriate to the Heart of Jesus and the Holy Spirit?’ (105)

In response to Allegra’s exposition of the importance of God’s infinite love, and the way the Franciscan tradition sees the ‘whole of creation permeated by love’ and that it is this love which is ‘all powerful and rules the heavens’ and which expresses the meaning of the Incarnation Teilhard observes:

‘ I see now in a new light the cult of the Sacred Heart of Jesus and of Christ the King: ‘ Cor Jesu, in quo Pater sibi bene complacuit!’ ( Heart of Jesus, in whom the Father was well pleased’. ( 100)

After listening to Allegra’s exposition of Dun Scotus’s Summula in respect of the Incarnation Teilhard explained: ‘ There you have the cosmic theology, the theology of the future!’ ( 92)

Adam is therefore a VERY important part of this icon: it is yet another window into the heart of Christ and into a ‘cosmic theology of the future’.
Posted by DWP at 10:52