As yet I have not blogged about the actual image of the Sacred Heart in the icon.  Let us begin with what  Ian has observed.   As is clear from his description, the Sacred Heart as depicted here is Christ Omega - the universal Christ we find in St. Paul.
Christ’s Heart is shown as  the culmination point for the whole of creation, both temporal and spiritual, a process with both an end or omega point, but which is also evolving through time as the energy of God’s Love, which first created, then redeemed and will finally consummate all things brings all things into unity in the Person of Christ who not only entered into Creation but entered also into death, giving Himself completely, beseeching all humanity to come to Him who is meek and gentle of heart so that they might be refreshed.

In the centre of the nimbus is a swirling rhythmic shape of fire. Christ’s Sacred Heart sits at the centre of the geometric shapes and is encircled with the Greek letter Omega. Jesus is placed within a nimbus which represents the manifestation of His Divinity, moving from a dark, unknowable centre to a bright circumference. The circumference billows with cloud forms representing the heavens which manifest the glory of God in its beauty and order. 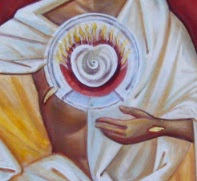 At the very centre of the icon  is the Sacred Heart itself, surrounded by its own mandorla within which is inscribed the Omega, denoting Christ's Sacred Heart as the Omega point.
( Here I would just draw attention to a few details of the heart which have struck me. First, that the mandorla  is transparent - diaphanous - that is significant for students of Teilhard.  Second, that as you look into the heart you can see a spiral which emphasises the pull or powerful attraction of divine love as a kind of gravitational force or energy towards which all creation is converging.  And third, that the whiteness of the centre powerfully evokes the Eucharist. )

Around the edges of the composition we have the created order, spiritual and corporeal, gathered together as one in the process of transfiguration at the Parousia, a time of transformation of the old order in the new heaven and the new earth.
The final layer of the nimbus is an octagon, symbolizing the eighth day of the New Creation.
Posted by DWP at 11:29