The Mother of Christ: Pearl of the Cosmos 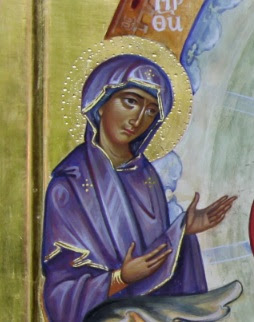 In Ian's design notes he observes: Crowning the vine is the Mother of God ...in a deisis of supplication and prayer, honouring the Son as is Manifested as King of Kings and Lord of Lords as He glorifies His Father through His Passion. She is, as it were, the flowering of grace, the Beautiful Woman clothed in the sun, the Immaculate Mother who is all for and in Christ whose transfiguration in death at the assumption was a foretaste of the new life which is for all those who welcome her Son.


When I first saw the design for the icon I was surprised and delighted to find that Ian had incorporated the Blessed Virgin Mary. The devotion to the Sacred Heart of Jesus and the Immaculate Heart of Mary have long been connected. The presence of Mary interceding for us is just right. At one stage I though that it would be good if the icon could also show the immaculate heart of Mary, but I agree with Ian’s decision to let it be understood, rather than represented. But when we reflect on the image of Mary we naturally think of her immaculate heart. We go to the Sacred Heart of Jesus in this icon through Mary. We pray that she will pray for us – poor banished children of Eve and Adam – who kneels in the left hand corner. There is so much to be said here that it is best to say as little as possible! But of course, as I have reflected on Mary in the icon my mind keeps referencing what Teilhard says about the mother of Christ.

Some of the most beautiful passages written by Teilhard on Mary and her cosmic significance we find in his writings during the first world war. Here are some extracts. In them we are left in no doubt as to the centrality of Mary to the Incarnation and to God’s plan for the universe.

From the Cosmic Life.
With the origin of all things, there began an advent of re-collection and work in the course of which the forces of determinism, obediently and lovingly, lent themselves and directed themselves in the preparation of a Fruit that exceeded all hope and yet was awaited. The world's energies and substances — so harmoniously adapted and controlled that the supreme Transcendent would seem to germinate entirely from their immanence — concentrated and were purified in the stock of Jesse; from their accumulated and distilled treasures they produced the glittering gem of matter, the Pearl of the Cosmos, and the link with the incarnate personal Absolute — the Blessed Virgin Mary, Queen and Mother of all things, the true Demeter . . . and when the day of the Virgin came to pass, then the final purpose of the universe, deep-rooted and gratuitous, was suddenly made clear: since the days when the first breath of individualization passed over the expanse of the Supreme Centre here below so that in it could be seen the ripple of the smile of the original monads,all things were moving towards the Child born of Woman.


From the Eternal Feminine

When the world was born, I came into being. Before the centuries were made, I issued from the hand of God — half- formed, yet destined to grow in beauty from age to age, the handmaid of his work. Everything in the universe is made by union and generation —by the coming together of elements that seek out one another, melt together two by two, and are born again in a third. God instilled me into the initial multiple as a force of condensation and concentration. In me is seen that side of beings by which they are joined as one, in me the fragrance that makes them hasten together and leads them, freely and passionately, along their road to unity. Through me, all things have their movement and are made to work as one. I am the beauty running through the world, to make it associate in ordered groups: the ideal held up before the world to make it ascend. I am the essential Feminine.

In the beginning I was no more than a mist, rising and falling: I lay hidden beneath affinities that were as yet hardly conscious, beneath a loose and tenuous polarity. And yet I was already in existence. In the stirring of the layers of the cosmic substance, whose nascent folds contain the promise of worlds beyond number, the first traces of my countenance could be read. Like a soul, still dormant but essential, I bestirred the original mass, almost without form, which hastened into my field of attraction; and I instilled even into the atoms, into the fathomless depths of the infinitesimal, a vague but obstinate yearning to emerge from the solitude of their nothingness and to hold fast to something outside themselves. I was the bond that thus held together the foundations of the universe. For every monad, be it never so humble, provided it is in very truth a centre of activity, obeys in its movement an embryo of love for me:
The universal Feminine.


So what we see in the icon is Mary, the image of the Eternal Feminine. The complete embodiment of the love – that force and energy - that fills the cosmos ( that fills all things) and which glows brightly before us in the heart of her son. Love, the energy which is the beginning and the end of all creation. We contemplate the Blessed Virgin, who intercedes for us and looks at us and asks us tenderly as our mother to open our hearts to this love wholly and completely.


Blessed Virgin, Pearl of the Cosmos, Mother of all things, pray for us