Just a little thing, really, but when I first saw the icon  I was drawn to the lovely blue clouds.  Ian says that they represent 'the heavens which manifest the glory of God in its beauty and order'.  They reminded me of a charming little episode in Dr. Jean Houston's recollection of her childhood  encounters with Teilhard in New York. She recounts that 'Mr. Tayer' told her: 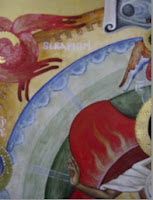 'Eh, Jeanne , look at the clouds! God's calligraphy in the sky!  All that transforming, moving, changing, dissolving, becoming.  Jeanne become a cloud and become all the forms that ever were.' Godseed: The Journey of Christ, Amity House Inc, Warwick, New York, 1988
And that is how I shall think of them: God's calligraphy.   A symbol of the nature of God's order. A complex universe constantly transforming,  moving, changing and dissolving.  God's creation is always  becoming.  Perhaps we are also like clouds: constantly becoming.  We should not be afraid of the fact that we and the whole of creation are always in the process of  becoming.  We are called  to become one with the centre of centres, one with the heart of the cosmos.  In the end we are complete and become one  and converge  with all the forms that ever were: we become one with the Sacred Heart at the heart of all things.
Posted by DWP at 08:31