The sacred heart of London 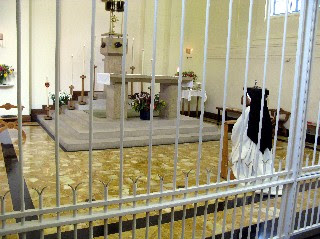 Seeing Ian’s most recent drawings has made me think quite intensively about the Sacred Heart. And on my return home yesterday I found myself staying put on the Central line, and making for Marble Arch. I was turning over in my head Teilhard’s famous lines about harnessing or capturing the energy of love. ( I quote it fully in French here, with the standard translation underneath.)

It is important to note here that so often this is quoted with ‘pour Dieu’ / ‘for God’ just cut out!! In doing so it greatly distorts what Teilhard is saying. For Teilhard love is an energy – the universal energy that drives human evolution. The Sacred Heart is the end point – the Omega point – of that energy. The whole purpose of human existence is to harness this great cosmic energy FOR GOD.

And that is when I thought that I had to stay on the Central line. Why, you might ask?

From Marble Arch station it is only a short walk to one of the most important places where we can experience the devotion to the Sacred Heart in London. As I reflected on Ian’s drawings I thought about the Convent at Tyburn: a place which is wholly dedicated to the task of harnessing love, pour Dieu. In the heart of all the noise of the city there is a small convent founded by MARIE ADELE GARNIER in the first year of the twentieth century. The order she founded is known as the Benedictine Adorers of the Sacred Heart. If you ever have the chance please go the Tyburn Convent and spend some time with the Sacred Heart. They have ten other convents ( in Australia, Ireland, Peru, Scotland, Ecuador, Columbia and Rome – and two in New Zealand )

When my wife and I first came to London – as a newly weds - we lived not far from the convent and we would always make a point of spending a little time as we walked into shop in Regent Street and Oxford Street ( not that we had any money!) . And over the years as we have moved further out of the city we have not been exactly regular visitors. But today, on the Central line I felt called to go to Tyburn convent. As I thought about that Teilhard quote in the context of Ian’s drawings it became clearer to me that I had to go there: and there I went.

The full title of this Benedictine order is the ‘Congregation of Adorers of the Sacred Heart of Jesus , of Montmartre, OSB’ .The congregation was originally established in Montmartre in 1898 - the district of Paris in which the Sacre Coeur is located. However, like Teilhard’s order – the Society of Jesus – the congregation was forced to leave France under the infamous 1901 laws against religious orders. Mother Marie Adele Garnier re-located to London and settled in Tyburn. This is, of course, the location of the gallows at which more than 100 Catholics were brutally executed during the reformation. She died in 1924, but the congregation she established is still there and has spread all over the world.

The sisters maintain a perpetual adoration of the Blessed Sacrament. It was, as always, a great privilege to be able to join the sisters in this great act of adoration and it brought back so many memories. All the time I have been running around the world and making my way in it they have been here in Tyburn adoring the Sacred Heart in the Eucharist. These good sisters had been harnessing the energy of love. I reflected on what kind of mess the Church – and the world - would be in nowadays if not for their adoration. But as I reflected on their love for the Sacred Heart I also felt anxious. Outside was a noisy busy London full of all kinds of (crazy) people. At any moment ‘they’ could burst in and destroy the peace which filled this small space in the middle of a great big city. And then I understood what placing all your trust in the Sacred Heart means: an absolute openness to God. It involves an acceptance of vulnerability.

People came in and out during the hour or so I was there. And it was remarkable the effect it had everyone who came in and shared in the devotion. Cutting through the silence was the general noise of the city outside and the throb and hum of the traffic and the underground made me feel that we were in a kind of spiritual engine room of the city. The adoration of the Blessed Sacrament did not feel as if it was taking place outside or removed from the world outside, quite the opposite. As we adored, we became more inter-connected with the fabric of the ‘real world’. It did not feel as if the convent chapel was at the periphery or margins of the life of London: we were at its very core – its heart.

As I walked towards the tube station to return home I felt so overwhelmed by the sheer mass of humanity and became increasingly depressed by the gap between the world of the sisters whose lives were dedicated to the adoration of the Sacred Heart and the world I had now rejoined. It was a world as described by Teilhard: a world being compressed. So many people, from so many countries all squished and pressed together. I have to confess I felt rather scared by the sheer mass of humanity: swarming and faceless. Questions buzzed around my head: We have to trust in this world and the evolution of human life? How could the Sacred Heart unite all things? What sense could I make of Christ Omega? By the time I reached Oxford Circus I had rather lost faith and hope. (... What is that line from Wordsworth : ‘ As I high as I had mounted in my delight in my dejection I sunk as low’? * ..) I felt totally confused and unable to really say why I felt so low. And then, I thought of those sisters in Tyburn. I thought of their silence and their adoration and I understood how, whilst we were all rushing about,they were busy at work harnessing that divine energy and somehow they became the still point in the eye of a storm. In harnessing the energy of love - for God - those sisters who had been brought to London all those years ago from Montmartre were in fact the beating heart of the Church and of the hope of the human race. What was taking place in that chapel 24 hours a day seven days a week was not a relic from the past brought to London over a hundred years ago: their adoration of the Sacred Heart was pointing the way to the future. They are showing us ‘le Feu’. Knowing that is what makes the difference: I stopped seeing the human mass, and began to see individuals once more!

But, as it sometimes chanceth, from the might
Of joy in minds that can no further go,
As high as we have mounted in delight
In our dejection do we sink as low;
To me that morning did it happen so;
And fears and fancies thick upon me came;
Dim sadness--and blind thoughts, I knew not, nor could name.
Posted by DWP at 13:56