Well after all these weeks and months, the basic design is now complete. Obviously I will continue to work on it and develop it, not least once painting commmences. But this is fundamentally the new image, inspired by the continuous devotion to the Love of God at the heart of all things which begins with the Fathers, and passed on int the Western Church through the medieval mystics such as St Bernard and St Gertrude, visualised in a unique way in the visions to St Margaret Mary and all of which seen through the prism of the prophetic theological vision of Teilhard de Chardin.


So, a description of the piece:

Christ sits enthroned in the midst of the cosmos, symbolised by the circular nimbus (Divinity which has no beginning or end point) in a square (the created, delineated order). The final layer of the nimbus is an octagon, symbolising the eighth day of the New Creation. In the centre of the nimbus is a swirling rhythmic shape of fire. Christ’s Sacred Heart sits at the centre of the geometric shapes and is encircled with the Greek letter Omega.
Around the edges of the composition we have the created order, spiritual and corporeal, gathered together as one in the process of transfiguration at the Parousia, a time of transformation of the old order in the new heaven and the new earth.
In the lower register we have a stylised vine for Christ is the True Vine of which we are the branches, with leaves and fruit, entwined with fantastical creatures, to the left animals, to the left, fish.The Vine recalls the Eucharistic life both a foretaste of the Life to come but also an actual participation in the transfiguring new Life which is offered to all humanity 'in Christ' through His Body the Church whereby he draws all people to Himself. The animals represent the earth, the fish the sea. Entwined on the left is Adam prostrating himself, representing the whole of humanity in need of redemption, the weary and heavy of heart whom Christ bids come to Him, while to the right we have St Mary Magdalene, who was commended for desiring the ‘One thing necessary', the women who forgiven much, loves much and who stood at the foot of the Cross alongside the Mother of God and St John. She thus represents the ‘new Man in Christ’, those whose hearts have been transfigured by Divine Love and who witness to the Love even in this present age as a foretaste of the consumation of all things in the new Jerusalem when Christ the Bridegroom will take His Bride to Himself. 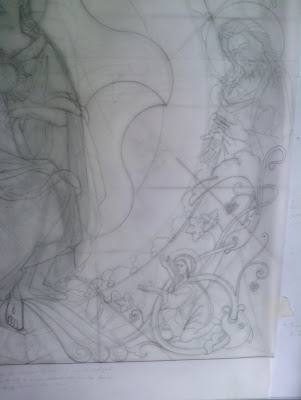 Crowning the vine is the Mother of God and St John the Baptist, in a deisis of supplication and prayer, honouring the Son as is Manifested as King of Kings and Lord of Lords as He glorifies His Father through His Passion. She is, as it were, the flowering of grace, the Beautiful Woman clothed in the sun, the Immaculate Mother who is all for and in Christ whose transfiguration in death at the assumption was a foretaste of the new life which is for all those who welcome her Son. John meanwhile heralds the One who is to come, manifesting the transition from the Old Covenent to the New, a witness to the evolution of salvation history where Christ must increase and all others decrease. At the Lord’s feet gushes forth seven springs of Life Giving water, just as water gushed forth from the temple in the vision of Ezekiel, the waters of life that water the earth with sweet water that brings the barren trees to bloom and the desert to spring forth, the waters of grace and new life that are the treasure of the Church. This is also representative of the gift of drink which Christ promises in the book of Revelation to those who are thirsty (Rev. 21:6). Hence the seven rivers represent the seven sacraments, the number which itself speaks of completion and fulness. The rivers burst forth from the Divine sphere into the square of the created order. 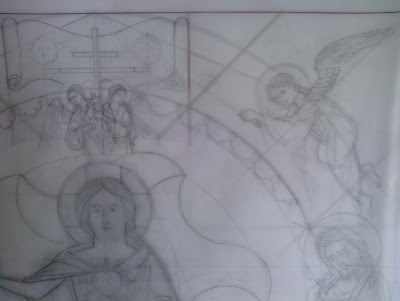 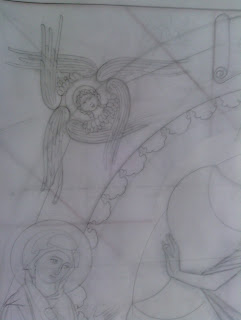 Above all of these are the supernatural or spiritual powers, what St Paul calls the powers, dominions, authorities, angels, archangels etc. To the right we have the angel carrying a measuring line from the Book of Revelation (Rev 21:15), measuring out the new Creation, principally the new Jerusalem. This reminds us of the profound order within Creation which will continue and be fulfilled in the new. On the left is one of the seraphim, a being of fire and flame which traditionally is understood to have the purpose of fanning the flames of the Love of God into a bright furnace whose heat permeates the whole of creation. The visions and reflections on the Sacred Heart speak powerfully of this energy of love, and in this teaching of the Church about these spiritual beings we have an important connection between the later devotion and its roots deep in the Patristic and Biblical theology of the Church from its earliest times.
The Archangels Michael and Gabriel hold the exalted Cross which crowns the composition, behind which the sun and moon, set against a map of gravitational energy, emanating from the planets and stars, being rolled up to make way for the new heavens and the new earth. In the visions of the Sacred Heart it is surmounted by the Cross, so the whole icon is here with the exalted Cross. The Cross touches into the depth of the darkness of God's Mystery, while reaching out into the heavens, displayed between the portents of the sun and moon. The heavens here are as a scroll being rolled up, and the pattern behind is drawn from one of the latest imaging of gravitational energy. Modern science has enabled us to perceive far more of the wonders of the universe than ever before in the history of the world, and maybe even of the cosmos as a whole. There are invisible forces at work, all within the marvellous order of creation, and all of which has its ultimate fulfilment in Christ. 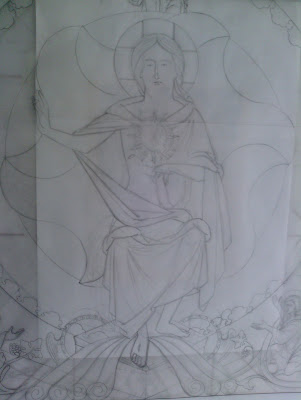 Thus we find Christ’s Heart as the culmination point for the whole of creation, both temporal and spiritual, a process with both an end or omega point, but which is also evolving through time as the energy of God’s Love, which first created, then redeemed and will finally consummate all things brings all things into unity in the Person of Christ who not only entered into Creation but entered also into death, giving Himself completely, beseeching all humanity to come to Him who is meek and gentle of heart so that they might be refreshed.
Jesus is placed within a nimbus which represents the manifestation of His Divinity, moving from a dark, unknowable centre to a bright circumference. The circumference billows with cloud forms representing the heavens which manifest the glory of God in its beauty and order. At the centre is the Sacred Heart itself, surrounded by its own mandorla within which is inscribed the Omega, denoting Christ's Sacred Heart as the Omega point as explored by Teilhard de Chardin.
Posted by Elias Icons - Ian Knowles iconographer at 16:43