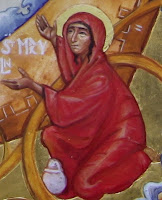 I was so pleased that Ian included St. Mary Magdalen on our  the icon of the Sacred Heart.  (Read, for example, here.) Spending some time in Paris gave me the opportunity to reflect on her relationship to the devotion.  Whilst in  Paris we attended the 'Madeleine' twice; once for the concert and then for Sunday mass.  I found the image of the icon kept popping into my head and enabled me to  think about her from so many different perspectives.  Is this what an icon is supposed to do?  It seems to me that is precisely what it can facilitate! 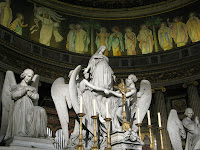 In the icon she is located on the right hand side, directly opposite Adam.  And the thought that occurred to me in the Madeleine - and was reinforced by looking at (so many!) works of art in the Louvre and the museum of the Moyen Age is that we are right to reflect on the relation between Adam and St Mary Magdalen.   The link it seems to me is the cross at the top of the icon.  For Christians the cross is the 'Tree of Life' on which the second Adam redeemed the world.  Mary Magdalene was at the foot of this cross as one who loved Christ with all her heart and was forgiven much  and loved much by Christ.  She points the way to the meaning of the cross as a symbol of God's love and mercy and calls us to open our hearts to that love and mercy as she opened hers.  Love was her choice. love was her way.  Adam on the other hand and other side of the icon chooses differently.  Adam wants knowledge: and so become like God. Adam desires KNOWLEDGE of the tree in the Garden of Eden.  St. Mary Magdalen desires only LOVE and MERCY from the tree on which hangs the saviour of the world on Golgotha.

As I reflected on this in the Madeleine it struck me that the whole history of the building reflected the different paths of Adam and Mary Magdalen. In brief: the church was originally a confiscated synagogue (1182) consecrated to the saint.  In the 18th century a new church was proposed and then during the French Revolution and the reign of Napoleon other (non religious uses) were suggested.   It was not until 1842 that the building was finally consecrated as a church.  It was thought that St Marie Madeleine was an appropriate saint for a church which would symbolise repentance and reparation for the terrible things done during the revolution, and also to symbolise national reconciliation: forgiveness and mercy.   The revolution, as we noted in a previous post, was  an utterly  merciless revolution designed to bring into being a new world based on reason and knowledge rather than Christianity.   It was a revolution in which Churches were turned into temples in which reason would be the object of worship.   The revolution was, in so many senses, heir to Adam's choice: the desire for knowledge and power so as to become like God.   The church of the Madeleine, however, can be read as a symbol of repentance and the recognition of how dangerous and misguided this view was then and remains today.  St. Mary Magdalen is therefore a reminder of  how, as human beings,  we have been created for love.  And, whenever and where-ever we loose sight  (as individuals or as societies ) of this we need to repent of our sinfulness in rejecting a life of love and building a civilization of hate, greed and fear rather than self-less love for God and our neighbour.    And when we repent  of our failure to love and when we open our hearts to that divine energy of love wholly and completely - as did Mary of Magdala - we see the other side of the cross ( as Teilhard put it).  We see the radiance of the risen Christ drawing all human beings  towards their completion in  Him.  We see the way, the truth and the light.
Posted by DWP at 11:12