Following the Sacred Heart to Paris: (5) Climbing the hill to Sacre Coeur 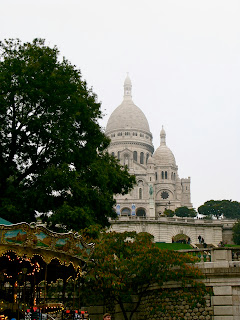 If you follow the Sacred Heart to Paris, then it is inevitable that you end up in Sacre Coeur. For me it is a place full of memories  as I think of  what has happened to me - and to Montmatre - over the many years I have been coming to Paris.  (See , for example: here.)  It was a cold morning when we walked up the 'butte Montmatre' and I could not help thinking that it was all very sad, tired and dirty.  That is to say, more tired and sad and dirty than I remember it from the last time.  As you spiral upwards physically, mentally and spiritually you spiral downwards!

Montmatre itself has lost what little charm it had left!  Having said that, I was reminded of someone many years ago talking about Charles Aznavour's song ( La Boheme hear  HERE ) in which he was moaning about the decline of the place back in the 1960s.   As usual the basilica was full of tourists, doing the circuit and then out. So sad.  What they get out of it, I fail to see.  We knelt down in front of the altar and tried to pray - but it is so difficult.  I spent some time just looking at the great mosaic  which was the subject of early posts to this blog.  Later, I had a chat with a very kind Benedictine sister in the bookshop whose suggested some things to read.  And then, we left.   So many thoughts were going around my head, and the more they went around - like tourists around the basilica - the sadder I became.   It was as if I had followed the Sacred Heart to the Sacred Heart, and yet somehow in all the crowds we had failed to meet up! And yet the basilica is, in so many ways, the great statement and monument to the Sacred Heart.  The basilica is the great votive offering of a country - la belle France. 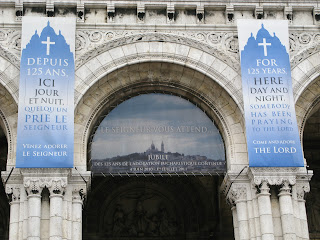 The first thing that came to mind, however,  was the Convent at Tyburn in London. ( I blogged about this. Here).  Back in 1898 Rev Mother Mary Adele Garnier had founded the 'Congregation of the Adorers of the Sacred of Heart, Montmatre.'   In 1901 - due to laws against religious orders - the congregation was moved to London.  And from there it has spread all over the world: but they have no convent in Montmatre  - the mount of martyrs.  Of course, the basilica has maintained a perpetual adoration of the Sacred Heart in the Blessed Sacrament for 125 years! And it was this thought which revived me - as well as a cup of hot chocolate.
The basilica in a sense is a gigantic metaphor for the Sacred Heart itself.  When you just look at the outside of things, it is difficult to find God anywhere in the sheer mass of humanity which swarms around and inside.   To experience the Sacred Heart you have to go beyond  the outside of things. (The physical heart.)  And ( what Teilhard called ) the within of things in the basilica  cannot be experienced as a 'tourist'.  You cannot be a tourist to the Sacred Heart.   You are not a tourist in your own house or home.  And to experience the Sacred Heart, I realized,  it has to become your home: your place of security, rest and comfort.   Thus the heart of the basilica is to be found  precisely where the banner outside tells us: in prayerful adoration of the divine centre of all creation.   Sadly, as a visitor and a tourist, I was not able to experience this real heart within the basilica.   However, if you contact the basilica it is possible to do precisely that, after the doors have closed (at 10.30pm).   See HERE.  Perhaps the next time I visit I will not do so as a tourist, but as a pilgrim coming home.  So, I will stay the night!  As the words of a well-known hymn expresses it: ' O Sacred Heart my home lies deep in you.'  HEAR here.)  And home, of course,  is where the heart is!

The trouble is what we see high upon the hill of Montmatre is a massive and imposing political statement: and yet deep inside this monumental structure is a spiritual 'within'.  And we can only really encounter the Sacred Heart in Montmatre when we understand the relationship between the within and the without of the building.  The within of the building - its core -  is the devotion to the Sacred Heart as the symbol of the love and word  of God made flesh.  The Sacred Heart - the temple of the Trinity.  The Sacred Heart, the dynamic energy of love which is pulling the universe towards its completion when Christ will be all in all.  The Sacred Heart - all that the great litany of the Sacred Heart embodies and which is expressed in another way in Teilhard's litany.  But the without is a symbol of a religious and a political kind.  It is fundamentally a political symbol :  it reminds us of how, in the past,  the Sacred Heart was a symbol of resistance and opposition to the belief that human beings can only advance through revolution and violence exercised in the name of reason.  And because of this, the building stands as an important statement which is relevant to us in the 21st century.  The Sacred Heart stands as a monument to those who suffered - on all sides - as a result of the defective belief that  'enlightenment' was only to be had through REASON.  It is a monument to the belief that humanity is just a collection of nation states.  (It was built after the Franco- Prussian war. )   Indeed, on this hill during the revolution St. Peter's church was proclaimed a 'temple of reason.'   For all its faults, the voice of the Church then, as now, was unequivocal: real enlightenment comes when we seek to change society not through revolutionary violence and through the exercise of state power and armed force, but through an evolutionary process which seeks to harness the capacity which humanity has for love.   It is therefore, so very appropriate that the basilica of Sacre Coeur is one of the great buildings of the world.  It should remind us of the dangers of believing that humanity advances only by using  the 'head'  - the very part of the body the revolutionaries liked to remove.  When I see the building it is as a reminder of how humanity has to evolve through combining the head and the heart.  Reason and faith. Logic and love.   Whenever human beings forget this link between these capacities that must be harnessed like two powerful horses ( in front of the building!)  humanity is prone to do stupid and evil things.   Sacre Coeur is a monument to so much of the stupidity and wickedness which we find in the history of France, but also in the story of every nation on God's earth.   At the same time, it is also a sign that we must have faith in the future of our planet and our capacity to 'build the earth' and realize that ( as Teilhard said) the 'age of nations is past.'  This faith should be rooted in what is contained in the within of the controversial structure which sits on the 'butte': human history and evolution has a point, a direction and a purpose.  We call this point towards which we are moving and evolving, the Sacred Heart of Jesus. The 'foyer' or the point - the divine centre-  at which all creation will converge.
As we descended down the steps of the rue Foyatier and looked back up at the basilica still enveloped in the misty cold air, it was this thought of a divine centre and  a heart on fire with love for us and for every single human being in Montmatre that warmed our hearts that morning.
Posted by DWP at 10:27