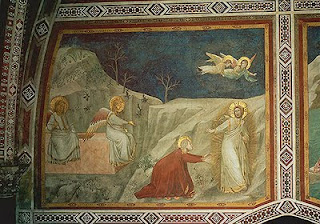 It is fitting that an icon of the Sacred Heart should feature, in addition to Mary – the Eternal Feminine – another woman and another Mary. One could say the ‘other Mary’, the Magdalene. And it is doubly fitting that it should be in the corner diagonally opposite the seraph. The Seraphim are the angels - the burning ones - who are closest to God, and whatever ‘version’ of St. Mary Magdalene we accept, one thing is clear : she was very close to Jesus. Of course, she is something of a puzzle in terms of who she is (exactly) in the gospels: Catholic and Orthodox traditions, for example, do not agree about who she is precisely but the unequivocal aspects of her role in the in the Gospels is that she was a follower of Jesus who was at the foot of the cross and is witness to his death and three days later she is the first human being to see him after the resurrection. It is to St. Mary Magdalene that the Risen Christ first appears and it is this woman who is asked to tell the male apostles that he was alive. She was thus the ‘apostle to the apostles’.

In this icon St. Mary Magdalene may be understood - as Ian states - as the one who ‘was commended for desiring the ‘One thing necessary'. She is the woman ‘who forgiven much, loves much and who stood at the foot of the Cross alongside the Mother of God and St John. As such ‘she thus represents the ‘new Man in Christ’, those whose hearts have been transfigured by Divine Love and who witness to the Love even in this present age as a foretaste of the consummation of all things in the new Jerusalem when Christ the Bridegroom will take His Bride to Himself’.

The first reading at Mass today serves to broaden our understanding of St Mary Magdalene in relation to the Sacred Heart. In the Song of Songs we read about the bride seeking one whom her ‘heart loves’ and upon finding him ‘holds him fast’ and will not let him go. (3: 1-4b). And St. Paul reminds is that in Christ we are (like Mary Magdelene) a ‘new creation’. ( Corinthians (2: 5, 14-17). The Gospel of St. John is so beautiful in how it describes the moment when Mary Magdalene realizes that Jesus’s heart is beating again: he is alive.

In the context of the Sacred Heart I think she has another significance, therefore: she represents all the women who have been touched by and have chosen to hold fast to the Sacred Heart. When we see Saint Mary Magdelene we remember that Jesus tells her not to ‘touch’ or ‘ stop clinging ‘ or ‘holding on’ to him ( ‘noli me tangere’) as he had not yet ascended to the Father. (John 20:17). But having ascended Jesus called some special women to touch him and hold on to him. He tells St Mary Magdalene not to touch and hold, but the revelations of the Sacred Heart invite us to desire, above all things, to be touched and held fast by his love. The Sacred Heart says to us ‘cling to me’ and hold fast to me: trust me.

First of all Saint Mary Magdalene represents all the women Saints who have experienced mystical and intimate encounters with the Sacred Heart. Amongst them Saint Catherine of Siena, Saint Gertrude and Saint Mechtilde, and Saint Margaret Mary Alacoque. And then there are the women who were inspired by the Sacred Heart to establish religious orders such as: St Jane Chantal, St Madeleine Sophie Barat, St. Mary Euphrasia Pelletier, Sister Henriette Aymer de Chevalerie and Sister Marie Adele Garnier. ( To name but a few!)

And then there are the countless millions of women who have had a special love of the Sacred Heart - women such as Teilhard’s mother, sister and cousin. And above all we remember and reflect on the women who – like his sister –have given their lives to the Sacred Heart as religious in communities all over the world. They are truly the beating heart of the Church.

-------
The 'noli me tangere' above is of course, by the wonderful Giotto. I remember spending hours making a copy for my ' O' level art course. ( Which actually came up in the exam, so I made good use of the practice! )
Posted by DWP at 09:17