Safely delivered on the feast day of St Ignatius 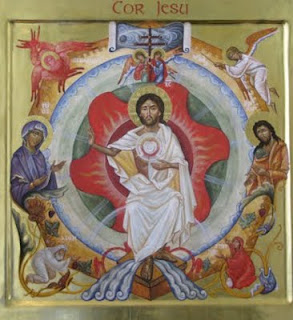 Ian arrived with the icon and we are absolutely delighted. But the journey to the Sacred Heart has really only just begun. The writing of the icon is completed, and now the reading of and praying with the icon begins! How appropriate it should be on the feast day of St Ignatius of Loyola - the founder of Teilhard's order! And no, we didn't plan it! Our deep and heart-felt thanks to Ian. It is truly a remarkable achievement as it shows how (in the words of Pius XI) the Sacred Heart is indeed 'Totius religionis summa'. A complete summation of our Catholic faith. SEE HERE FOR LARGER IMAGE of the Sacred Heart as Christ Omega - the Universal Christ .


That the icon arrived on the feast of St. Ignatius was entirely unplanned, but also so providential. Throughout all his difficulties with Rome and with his Society, Teilhard remained an obedient Jesuit. He could have simply just left the order and he would have been free to publish his work, but he remained unto the last obedient to the will of his superiors. It was utterly inconceivable to him that he would leave or disobey his superiors. Prof. Ursula King, one of the great authorities on Teilhard sums it up nicely:

The world-affirming quality of Teilhard’s spirituality bears the hallmark of Ignatian spirituality with its emphasis to find God in all things, not only in a religious context, in prayer and meditation, but in all human experiences and activities. Jesuit spirituality has a very active character, and Teilhard represents this spirituality in a decidedly modern form. Christ in All Things, SCM Press,1977. P 159-60

Yes, his order was rather worried about what Teilhard was up to, and refused him permission to publish his ideas, but we must always remember that despite this the Society of Jesus also allowed him to pursue a highly productive research career as a leading paleontologist of his day. The fact that there is such a wealth of Teilhardian scholarship and commentary published by Jesuits shows that they regard him as one of their own. So the delivery of the icon on this day was very welcome and made me smile.
Posted by DWP at 17:24