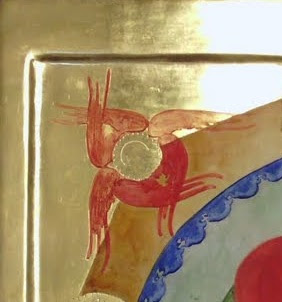 Since Ian suggested using a seraph in the context of the Sacred Heart I have been wrestling with the idea. ( See blog HERE.)

It all sounded interesting, but in truth it did not immediately ‘light my fire’. In the Sacred Heart in Naur Ian has used the Seraphim to great effect. In his original blog Ian used Giotto’s stigmatization of St. Francis which has a magnificent seraph. He also quoted from St. Thomas Acquinas’s Summa Theologiae. All of this struck a chord with me in terms of Teilhard’s idea of love as an energy which (gravitationally ) pulls us towards the divine centre: it is a force which is ( as St Thomas puts it ) ‘upwards’ and ‘continuous’ which impels us towards God. In this sense the Seraphim can be seen as the embodiment of the process whereby God’s light and fire is spread through all creation. But, I was not sure about how this could be translated into an image which could make the icon an aid to prayer. However, I have learnt that ‘trusting in the slow work of God’ is an essential part of the process of writing an icon. Then a while ago I had an email from a lay Franciscan requesting a copy of the Pinta card and that in turn prompted me to think about the Franciscan tradition. I went back to the Giotto which Ian used in his blog. Slowly, things fell into place. Eventually, I actually got the link between the Seraphim and the Sacred Heart: it is St. Bonaventure. ( Which means, of course, ‘Good chance’ or ‘good fortune’!!) Today, the 15th July, we remember a great Franciscan saint: Saint Bonaventure ( 1221-1274) . (READ MORE HERE) And until recentIy I only knew a few things about him: the first is that he appears in Dante’s Paradiso. The second thing I knew was, of course, his title – which I never really thought about before(!!) – ‘he is known as ‘Doctor Seraphicus’ the Seraphic Doctor. As I have discovered, his title of Doctor Seraphicus is because he was seen as someone who was on fire with the love of God. And, like a seraph, St Bonaventure was someone who was very close to God. And again, like a seraph, he fanned this love of God out into the world through his acts of charity and his mystical and theological writings. The third thing I knew about him is that he was a major influence on Benedict XVI. For an excellent radio program on Bonaventure and Benedict LISTEN HERE. Please do: it is a real revelation.

In the radio program Father Rick Martignetti of the Order of Friars Minor sums up Bonaventure’s approach: 'You can't learn about God intellectually unless you experience God in your heart.'

And that, it seems to me is the message which our seraph is imparting to us in this icon. It is the message of St. Bonaventure. God wants us to experience the transforming power of his love in our hearts - as well as understand it in our heads! We cannot learn about God purely from intellectualizing. We have to open our minds and hearts to the divine energy of God being fanned by those seraphs.

His great book ITINERARIUM MENTIS IN DEUM - JOURNEY OF THE MIND INTO GOD (READ HERE) ( and it is well worth reading!!) St. Bonaventure takes the image of the six winged seraph and uses it to structure his journey to the mind of God. He recounts how, visiting mount Alverna – where St Francis experienced his vision of a seraph - he began to understand the six wings of the seraph as denoting six steps towards the mind of God.


I turned aside with the love of seeking peace of spirit towards mount Alverna as towards a quiet place, and staying there, while I considered in mind some mental ascensions into God, among others there occurred that miracle, which in the aforesaid place happened to blessed Francis himself, that is, of the vision of the Seraph winged after the likeness of the Crucified. In the consideration of which it suddenly seemed to me, that that vision showed the suspension of our father himself in contemplating Him and the way, through which one arrives at that (suspension). For through those six wings there can be rightly understood six suspensions of illumination, by which the soul as if to certain steps or journeys is disposed, to pass over to peace through ecstatic excesses of Christian wisdom. The way is, however, naught but through the most ardent love of the Crucified.. The likenesses of the six seraphic wings intimates six stair-like illuminations, which begin from creatures and lead through even unto God, to Whom no one rightly enters except through the Crucified.

… ‘Blessed the man, whose assistance is from Thee, he has arranged ascensions in his own heart in the vale of tears, in the place, which he put them’ .Since beatitude is nothing other, than the enjoyment of the Most High Good; and the Most High Good is above us: no one can become blessed, unless he ascends above his very self, not by an ascent with the body [corporali], but with the heart [cordiali].

So, we ascend these steps with our heart!
Reading the book I was immediately struck by how these seraphic wings can advance our journey by prompting us to see God in the universe around us! We take the first step when we see God in his creation. The first three chapters are : ‘on the steps of the ascension into God and on the sight of Him through His vestiges in the universe’; and ‘ on the sight of God in His vestiges in this sensible world’; and ‘the sight of God through His image marked upon the natural powers’. In other words: we begin our journey to God by seeing him in his creation. Let me put it this way, I came to the conclusion that : Dr. Seraphicus is very Teilhardian - or Teilhard is very Seraphician!

Fortunately - bona ventura – I came across an excellent book – The Humility of God: A Franciscan Perspective- by a leading Franciscan scholar Ilia Delio OSF which does an impressive job in exploring the relationship between Bonaventure and Teilhard. Sister (Dr.) Ilia states unequivocally that :

Although Teilhard was not a Franciscan, his notion of a Christic universe complements Bonaventure’s theology of an Incarnation in the light of the humility of God.

For Teilhard, Christ is the goal and center of the universe and the reason for the universe itself… yet what Teilhard grasped was no different from the insight of Francis of Assisi or Bonaventure, namely, Incarnation is what creation is all about. In the incarnation God humbly bends down to lift created human nature into unity with the divine nature.. Ilia Delio, OSF, The Humility of God : A Franciscan Perspective, St Anthony Messenger Press, 2005 P4/ 126 GO HERE

The more I read about Doctor Seraphicus, the more do I realize the importance of that seraph which is emerging on the top left of the icon. Perhaps, just a thought, we are all called to be earthly seraphim: to draw close to God and like St Bonaventure, flap our wings to circulate the energy of love around us. But, of course, to do that, our hearts have to be aflame with the love of God. Perhaps, that seraph really captures and expresses the essence of what the Sacred Heart is about. Something to meditate on. It also directs our attention to the importance of the Franciscan tradition and what it can bring to our understanding of the Sacred Heart. To adapt Sister Ilia’s phrase: ‘ In the Sacred Heart God humbly bends down to lift created human nature into unity with the divine.’ I think from now on that top left hand corner will be a place to reflect on these words and on the lives of St Francis and St Bonaventure and what they tell us about the Sacred Heart! So seraph, flap those wings: all six of them!!
Posted by DWP at 13:08