The Sacred Heart and diaphany of God 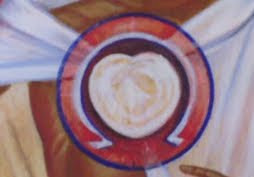 Looking at the latest developments on the heart itself, I think the idea of transparency is SO exciting. Transparency is a key theme in Teilhard. He often wrote about the DIAPHANY of God. ('la Diaphanie de Dieu' ) Thus the Sacred Heart as a transparent image is absolutelty right. I didn’t think to mention this idea : but (remarkably) you have arrived at it yourself in a very beautiful way. Which is how it should be.

Here is a relevant extract from the Le Milieu Divin


Like those translucent materials which a light within them can illuminate as a whole, the world appears to the Christian mystic bathed in an inward light which intensifies its relief, its structure and its depth. This light is not the superficial glimmer which can be realised in coarse enjoyment nor is it the violent flash which destroys objects and blinds our eyes. It is the calm and powerful radiance engendered by the synthesis of all the elements of the world in Jesus. The more fulfilled, according to their nature, are the beings in whom it comes to play, the closer and more sensible this radiance appears; and the more sensible it becomes, the more the objects which it bathes become distinct in contour and remote in substance. If we may slightly alter a hallowed expression, we could say that the great mystery of Christianity is not exactly the appearance but the transparence of God in the universe. Yes, Lord, not only the ray that strikes the surface, but the ray that penetrates, not only your Epiphany, Jesus, but your diaphany.
P130-131, Harper and Row, 1960 edition.

To read the book, go HERE.

In a letter to Leontine Zanta he says:

Have a good year , my friend, may it be filled with God, with his light and peace, and may we be granted the restorative vision of the mysterious Diaphany (I prefer that word to Epiphany ) by which the universal Christ illumines the unique and higher substance of things, so as to act on us through them and so draw us to their common summit.! The more I advance in life, the more I think that the true wisdom, true ‘philosophy’, consists in being able to discern – and then migrate to - this divine milieu.

Teilhard saw the Sacred Heart in terms of this diaphany : the transparence of God in the universe. ( This is why he liked the Pinta picture. SEE HERE ) The Sacred Heart as the divine diaphanous centre which draws us deeper into the furnace of God's love. I think the icon is capturing this wonderfully well.

And so a prayer for today which reflects on the transparency of the Sacred Heart:

May our life be filled with God’s light and peace, and may we be granted the restorative vision of the mysterious Diaphany by which the universal Christ illumines the unique and higher substance of things. May the Sacred Heart of Jesus draw us ever closer to the divine centre of all creation ! AMEN
Posted by DWP at 08:51