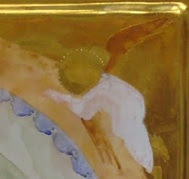 Let us return to the top of the icon. In the far right of the icon is an angel. Ian notes:

... To the right we have the angel carrying a measuring line from the Book of Revelation (Rev 21:15), measuring out the new Creation, principally the new Jerusalem. This reminds us of the profound order within Creation which will continue and be fulfilled in the new...

I think it is significant that the angel it is diagonally opposite the figure of Adam. From Adam the icon invites us to contemplate the new creation which will come into being through Christ Omega. As our eyes travel from the bottom left to the top right we encounter the one who will put an end to the old creation in which the children of Adam have thus far evolved. He will wipe away all the tears and pain which has been the lot of humanity and of all living things which inhabit this ‘valley of tears’ . The law of entropy will be abolished. Death will be no more. Alpha and Omega will make all things new. And then we see the angel measuring the dimensions of the new creation which has no need of moons and stars : it is a creation bathed in the light of divine love. And we can also see the angel as measuring out the long evolutionary journey which the cosmos and the children of Adam have taken to converge on the beginning and the end point.

In the Sacred Heart at the very centre of all centres in the icon we are shown the beginning and the end of all things. We look into the heart of Christ Omega and see, like Dante, our beginning and our end. We realise, as we contemplate the furnace of the Sacred Heart, that we are being pulled into unity with the Cosmic Christ, revealed as:

Yes, none other than the Sacred Heart of the universe : The love that moves the sun and the other stars.

The heart that calls to our heart.
Posted by DWP at 13:10