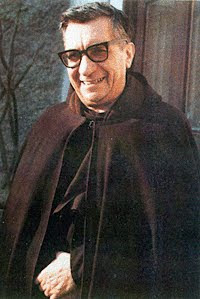 It fascinates me how this pilgrimage to the Sacred Heart (travelling by icon) has involved making quite complex linkages at so many levels. And yet, despite the fact that all the roads I take on my peregrinations seem to go off in a unexpected directions, and re-engage me with aspects of my own life, they always lead back to the heart of Christ. Ian’s seraph is a good case in point. I would never had thought that it would re-connect me with a saint for whom I am sure we all had a special love when we were children. In my mind’s eye I can see the picture of St Francis preaching to the birds that adorned the wall of my school room. And he remained special to me and undoubtedly informed my interest in ‘ecological’ and ‘environmental’ issues as a student. Having not looked at it for many many years I came across a book that I had given my wife as a present when we were students and I had forgotten how intense our love of St Francis was at the time. But I had never read any of the work by St. Bonaventure until a week ago. And that has been a revelation of a most profound kind . St. Francis was important to Teilhard – but it took Ian’s seraph, an email from a lay Franciscan and discovering Sister Ilia Delio's inspiring book on the Humility of God: A Franciscan Perspective. ( SEE HERE) for the connections to be made!! And it is a very significant connection in terms of the Sacred Heart. It is wonderfully providential that the seraph should be in the icon - not as a kind of side character - but now as a vitally important dimension of the icon!!

Teilhard makes reference to Francis - and the seraph - in the Divine Milieu. He writes in ‘seraphic’ terms.

In a letter to Auguste Valensin (1920) he ‘dreams’ of a new St. Francis or a new St Ignatius who could show the way to a ‘new sort of Christian life’ which is ‘both more involved and more detached from the world’. The world, he thought needed another St. Francis! Whilst in his journal the same year he reflects on what Francis and other saints had accomplished and asks’ Who then will see and find the means of bringing about the reign of Christ Alpha and Omega, the Christ of St. Paul, the Universal Christ? May I be, in my or through my death, the humble precursor of such a man!’ (Cited in Sion Cowell, The Teilhard Lexicon, p85) .

And that is how we should see Teilhard in relation to the Sacred Heart: as a means of bringing about the reign of Christ Omega: the Christ of St. Paul. In this, he was apparently inspired by St. Francis. In Peking Teilhard befriended the Franciscan (the now ) Venerable** Gabriel Allegra ( PHOTO TOP RIGHT ABOVE) between the years 1942-45. Fr.Gabriel recalls that in conversation Teilhard remarked that :

‘Francis is so dear and close to me! I believe he assists me in my difficulties and blesses my work. In him one can feel the presence of God the Father and the refreshing perfume of the house of Nazareth.'

( in Gabriel M. Allegra, My Conversations with Teilhard de Chardin on the Primacy of Christ. Peking , 1942-1945, Franciscan Herald Press, Chicago 1971 p55 ) ( I should write more about these fascinating conversations......)

Thus, the close relationship between Teilhard and Franciscan spirituality is more important than we might suppose! And that seraph is becoming a key element of the icon!

As we approach the completion of the icon we should ask for St. Francis and St Bonaventure to pray for us. You never know, they might be on good terms with a seraph or two! And so we humbly entrust this project to their patronage. We should also ask the Venerable Gabriel Allegra- who knew Teilhard and had a special devotion to the Immaculate Heart of Mary - to pray for this work.