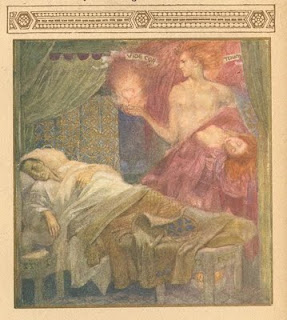 Not for the first time I find that focusing on the Sacred Heart has served to draw together and integrate thoughts and feelings as well as my present and past. The latest ‘turn up for the book’ is the connection between Teilhard and Dante and how this in turn connects with the Sacred Heart. But as the Sacred Heart is (as Benedict points out) at the very centre of Christianity, it is not so surprising that this should happen. I have been reading Dante and Teilhard since my teens, but have never really connected them or thought about them in the same kind of box. However, when we read them in parallel they serve to illuminate each other in ways that have implications for thinking about an icon of the Sacred Heart.

In June 1917 Teilhard writes to his cousin noting the publication of a new edition of Dante’s Vita Nuova – The New Life . He then notes something which has been addressed in a previous blog.

One of the most interesting mystics to study from my point of view would, in fact, be Dante, so possessed by and passionately interested in the real. ..there are few better examples than Beatrice to make one understand what is meant by the scaling up (to the level of the universe ) of the feeling nourished by a particular object ( and the object itself. - …I’m tending to give still more prominence to the realism by which mysticism lives, and also to distinguish more sharply the alternating movement that carries the soul towards (and in turn drives it away from) the divine centre, homogenous and essential, through the particular determined forms of the real that we have to know and love and bring into being. (Making of a Mind, 195)


What is apparent from his writings at this time is that Dante was at the forefront of his mind. ( As was the Sacred Heart, as he had written to his cousin about the devotion a few months before his letter on Dante.) The most obvious statement of this concern is his essay on the Eternal Feminine. In this piece, as we have noted in a previous blog, he indentifies the Virgin as a Beatrice, pointing the way to the ‘divine centre’. And also has been widely acknowledged he saw his cousin Marguerite and the other women in his life as playing the Beatrice to his Dante. But it has occurred to me that the Dante-Teilhard link is rather more than just the ‘Eternal Feminine’.

Here I would just like to make a few observations about the New Life. Just a few, because this is just a blog, not a treatise! So, just a few thoughts from an amateur Teilhardian -Danteist!


I managed to dig out the copy of The New Life that my friend Gabriele gave me all those years ago. Finding a book that one has not looked at for many years (ok, Richard Nixon was US President when I last opened the Penguin Classics edition, 1964) ) is rather like meeting an old friend. It brings back memories and a chance to think about water and bridges. Inside is a piece of paper with Gabriele notes on a poem – in Italian. And I recalled his explanation of the book and why Dante was so important to Italians. As I recall we looked at various paintings of Dante and his poetry in books. And he told me all about a ‘bella’ ‘Beatrice’ he had met – not in Florence but in Cardiff. I recalled that he believed that the whole point of life was to find your Beatrice.

I sat down the other day and tried to read The New Life through Teilhard’s eyes. What would he have taken from it? Yes, there is Beatrice who draws on Dante towards God, but there are other elements which are significant. Let us just focus on one here. It is so obvious – but I nonetheless failed to pick up on it despite knowing the book pretty well and that is the vision following his meeting (in passing) with Beatrice. That night he has a dream. In his dream ‘Love’ comes to him holding Beatrice in his arms who is naked apart from a blood covered cloth wrapped around her. In one of his hands Love holds out a heart all on fire. Love says to Dante: ‘ Vide cor tuum.’ (Behold your heart.)

‘When he had stayed there for some time, he awoke the sleeping woman and forced her to eat the burning thing in his hand; and she ate it with great misgivings. In a short time..he clasped the lady in his arms and turned away with her up towards heaven.’ (IV)

And this is the subject of the first sonnet. Dante’s journey which begins with ‘Vide cor tuum’ is thereafter not a romantic ( heart throb) love story, but a quest to understand divine love. As the introduction ( by William Anderson) to my edition notes ( and I marked this all those years ago!) : ‘Beatrice dies and draws up Dante’s highest aspirations to her position, where Mary is, in the heaven of humility. Thus through this chaste love the conflict between the teachings of the church and the worship of the earthly lady is resolved.’

His vision of the burning heart consumed by the object of his love, is as we discover in the book, an expression of the spiritual journey from the love of a woman, to the love of God. Is this dream in Dante an early example of the Sacred Heart? Would Teilhard had seen it as such? I think yes, to both questions. For Dante the figure of Love is divine. Indeed, in the closing sections of the New Life he is quite explicit about the Christ-like nature of Beatrice. Beatrice is leading him to Christ. That is the whole point of the book. Just as in the gospel, when Christ appears after the resurrection his followers ( especially the men) do not recognize him. Neither does Dante, but it is clear that the Lord ‘Love’ who holds Dante’s heart in his hand is divine: for ‘God is love.’ But Dante does not see Christ’s heart: the flaming heart is his own. It is on fire - being consumed by love. Beatrice eats his burning heart and is taken off to heaven. It is also important to remember that at this time although the Sacred Heart was not a recognized devotion, there were many who were privately devoted to the heart of Jesus. Chief amongst these were the Franciscans. And Dante was very much schooled in Franciscan Catholicism. Thus Dante’s journey to understand divine love begins – in poetic sense – with his vision of Love holding a flaming heart. Before this Dante is just a young man who has been infatuated for many years with a school girl ( like my friend Gabriele) . His dream of the burning heart marks the beginning of a spiritual journey that will end in the Divine Comedy. His dream in The New Life is of Beatrice as a saint, full of love, arising to heaven and leading him to Christ.

Teilhard – as someone devoted to the Sacred Heart must surely have picked up on the implications of what Dante was saying for his own thinking. He must have warmed to the part of the book where Dante has a vision of the’Lord of Excellence’, who weeping tells him that Love is ‘Like a centre of a circle, from which all parts of the circumference are equally distant’ (XII) . Beatrice - who has his heart - is leading him into the circle. The New Life is full of references to the heart : and the heart is a kind of doorway or point of departure on this journey towards the centre of the divine circle: God. This must have resonated with Teilhard at a very deep level. Just as the vision of the burning heart enables Dante to resolve the conflict between his romantic and spiritual love, the Sacred Heart will enable Teilhard to resolve the conflict between his love of matter and love of God and between science and religion. It is this sense that Teilhard sees Dante as being ‘real’ and showing how to ‘scale up’ to the ‘level of the universe’. In the New Life I think Teilhard sees the stirrings of a New Christianity. But this is clearer in the Divine Comedy – see next blog! ( The Divine Comedy and the Comedy of Evolution)

----
Note on the picture. Try though I may, I have yet to find much by way of paintings or drawings based on Dante's New Life. The exception is the image above which is by Evelyn Paul (1883- 1963) dated 1916. This was done as a series of illustrations for an edition of Dante Gabriel-Rossetti's translation of The New Life. GO HERE to find out more about this artist. ( A truly wonderful illustrator!)
Posted by DWP at 18:01