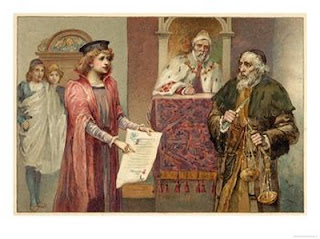 Having completed the novena to the Divine Mercy I think I am in a better position to reflect a little more on its relation to the Sacred Heart.

First of all the image. What is noticeable is that the original image painted in Vilnius by Kazimirowski in 1934 does have a directness which subsequent representations lose. It was heavily restored in 2003. I prefer the un-restored version, but the restored version is not so bad: they have an honesty about them that the other later versions lack. The other famous image was painted in 1943 by Adolf Hyla - which I find rather holy picturish. Other popular representation are by Robert Skemp and Kathleen Weber – and the less said about these the better. I must confess to finding so many of the later images increasingly sentimental and rather lurid and really not conducive to prayer. But that is just me, I guess. For the record, Saint Faustina was not too keen on the original image – and wept that it did not capture the beauty of what she had experienced. What they all have in common, however is the emphasis on rays of mercy flowing from Jesus’s concealed heart. So the images are, in my opinion, rather poor as works of religious art. I find the best way to pray with this image is to close ones eyes as soon as possible and focus on the flows of mercy. But, as I say, it may be that for some it works. For me, it works as a kind of initial spark of an idea. But it is iinteresting to note that Saint Faustina records in her diary that the image itself was not important . Its significance was 'Not in the beauty of the color, nor of the brush' but in God's grace. (Diary 313) In which case, as in all works of religious art, we wait upon God's grace rather than the skill of the artist. It is only in prayer that the message of the image can be understood.

On meditating on and praying with this image, it is these rays which command my attention: in this regard it is reminiscent of Pinta’s Sacred Heart. I have a feeling that if Teilhard would have had access to this he would have rather liked it for that reason.

As for me, when praying the Divine Mercy chaplet I just could not help thinking of Portia’s famous speech in the Merchant of Venice. ( In my day we had to learn such stuff off by heart in school. ) It kept popping into my head all the time and so in the end became part of my prayer. When Portia asks Shylock to exercise mercy, he retorts: ‘On what compulsion, must I?’ It seems to me that Shylock speaks for all of us when he poses this question: why should I be merciful?

Portia’s reply says it all.

The quality of mercy is not strained.
It droppeth as the gentle rain from heaven
Upon the place beneath. It is twice blest:
It blesseth him that gives and him that takes.
Tis mightiest in the mightiest; it becomes
The throned monarch better than his crown.
His scepter shows the force of temporal power,
The attribute to awe and majesty,
Wherein doth sit the dread and fear of kings.
But mercy is above this sceptered sway;
It is enthroned in the hearts of kings;
It is an attribute of God himself;
And earthly power doth then show like God's
When mercy seasons justice.


This idea of Mercy as an ‘attribute of God himself’ and therefore one which must use to ‘season justice’ is, of course, central to the Divine Mercy as a devotion. As we contemplate Divine Mercy, we recall that it is something which is common to Judaism, Christianity and Islam. ( And indeed other religions.) Perhaps this devotion is calling us to put this ‘attribute of God’ to the forefront of attempts to seek peace and reconciliation between people of the Abrahamic faiths. Mercy is severely ‘strained’ in so many parts of the world today. Rather than choosing mercy so many people choose to take their justice 'unseasoned' and in blood and flesh. And they often do this in the name of a merciful God! However, if the world is to progress, we have to focus with greater intensity on the idea that God is Mercy and God calls us to be merciful. I think this is what the devotion is calling us to do.
By reflecting on the Mercy of God I have come to realize that the future evolution of humanity is wholly dependent on our willingness as a species to be merciful to one another: that means that we must cease to see people who are different to us ‘the other’. When we see people as not one of ‘us’ we can be utterly and completely without mercy. Realizing a sense of the earth and humanity as a whole involves understanding that the answer to Shylock’s question ‘ On what compulsion must I [ be merciful] ?’ is because it is only through mercy that we can become fully human. Harnessing those rays of mercy which flow out of the Divine Mercy image is a necessary aspect of (what Teilhard called ) harnessing the ‘energy of love’ for God. It is only through choosing mercy - individually and collectively - that we can evolve and realize our potential as children of God. As a prayer in the Divine Mercy Chaplet beautifully expresses it;

Eternal God, in whom mercy is endless, and the treasury of compassion inexhaustible, look kindly upon us and increase your mercy in us, that in difficult moments we might not despair, nor become despondent, but with great confidence, submit our selves to Your holy will, which is Love and Mercy itself. Amen.


When we exercise compassion - and submit to God's holy will - we are acknowledging that we are made in the Creator’s image and likeness and are therefore made to be merciful. But, all too often human beings choose cruelty, vengence and blind ‘justice’ rather than forgiveness and understanding. When we are merciful we place ourselves in the position of another : we choose to do to a fellow human being what we would want to happen if we were in the position of the person asking for our mercy.

Jesus, as the Second Person of the Blessed Trinity, shows us the way because he has experienced a world in which no mercy is given. And yet we as individuals constantly wound Christ through our inability to love and our readiness to hate. We only have to reflect on the news which fills our newspapers and TV screens to appreciate how utterly merciless human beings can be. To be a Christian is to believe that God does not stand outside human suffering and pain, in Jesus God weeps with us and feels our pain. His heart is pierced and bleeds. The Divine mercy reminds us that despite all our lack of compassion and love, God still loves us. God is merciful. When we pray ‘Jesus, I Trust in You’ we are trusting in the mystery of God’s infinite mercy. We have to trust in the mercy of God - in Portia's sense , 'enthrone mercy in our hearts' - or else live in a world consumed not by the power of love, but the power of hate. It is our choice. Blessed John Paul expressed this on during the Mass for the canonisation of St Faustina when he asked in April 2000:

What will the years ahead bring us? What will man's future on earth be like? We are not given to know. However, it is certain that in addition to new progress there will unfortunately be no lack of painful experiences. But the light of divine mercy, which the Lord in a way wished to return to the world through Sr Faustina's charism, will illumine the way for the men and women of the third millennium..........May your message of light and hope spread throughout the world, spurring sinners to conversion, calming rivalries and hatred and opening individuals and nations to the practice of brotherhood. Today, fixing our gaze with you on the face of the risen Christ, let us make our own your prayer of trusting abandonment and say with firm hope: Christ Jesus, I trust in you! Jezu, ufam tobie!