Teilhard and the Divine Comedy 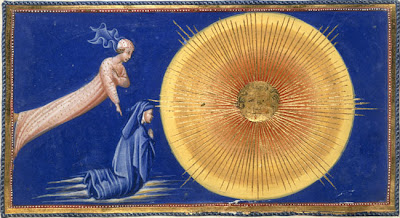 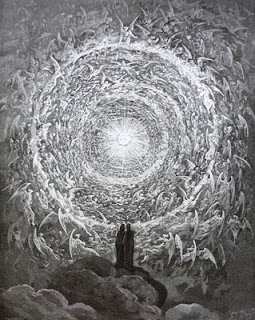 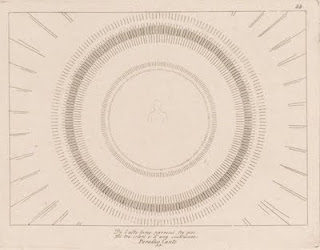 ABOVE: some illustrations of God, based on Dante's Divine Comedy
Top, Giovanni di Paolo, 1450; Middle. Gustav Dore, 1870; Bottom, John Flaxman, 1793 ( Click on them to see more clearly) Notice the face of Christ in the di Paolo and the outline of a man in the Flaxman.

I spent many happy hours reading The Divine Comedy as an undergraduate as part of my studies in Medieval political and economic thought. So, I know that just to say a few words about one of the greatest books ever written is rather silly. But, I believe that Dante can help to enhance our understanding of Teilhard’s approach to the Sacred Heart – and which in turn can contribute to thinking about our icon. I do this in the spirit which Teilhard invites in his letter to his cousin back in 1917: that is, to see Dante from his ‘point of view’. ( And vice versa!)

Taken together The New Life and the Divine Comedy explore the theme of ‘Love’ and take us on a journey to the very source of love, God. His journey begins in The New Life with his love for Beatrice ( who was a real woman) and ends with Beatrice leading Dante into the presence of God – who is love. The death ( at the age of 24) of Beatrice (Bice de Folco Portinari) led Dante into an intense period of reflection and writing. The New Life charts a love which begins as a story of courtly love and ends with divine love. It is a story which captivated Teilhard as it has countless others. We know that he saw in Dante’s chaste love of Beatrice an archetype of the relationship which he was to have with several women in his own life, but the parallel’s with Dante go much further than this. Of course, it is plain daft to think that we can say Teilhard was influenced by Dante in a direct way, but it is reasonable to argue that we can use Dante to illuminate Teilhard’s own life and work. Indeed, he invites this by suggesting that we should look at Dante from his point of view.

Looking at The New Life from Teilhard’s point of view, the first sonnet must have really grabbed his attention. Here is a man who is devoted to the Sacred Heart, and for whom it will assume an increasing centrality in his intellectual and spiritual life. Dante’s flaming heart dream was a moment of profound revelation to him. He tells us that he reflected on it, and that he talked to ‘many famous poets’ about it. The poetry – the whole book - is his attempt at analysing what the heart dream could mean. Indeed, he recounts that the vision made him quite ill and his friends were concerned about his state of health. So, the dream was, as we would say, a life changing event. Teilhard read this as someone for whom a ‘heart’ experience was also a life changing event. He recounts in ‘The Heart of Matter ‘that the moment he grasped the meaning of the Sacred Heart was an ‘astounding’ and a defining episode in his life. The parallels are exact and could not have been missed by Teilhard. From then on I am sure he felt that he had much in common with Dante’s journey.

We know that he read the Divine Comedy during the first world war . So, what might he made of it - from his point of view? The first thing to say is that - as far as I am aware - he does not actually acknowledge any particular debt to Dante – apart from the Beatrice reference. In such matters we can only defer to one of the greatest experts on Teilhard ,Sion Cowell, who notes that he was ‘greatly influenced’ by Dante: ‘Teilhard read or, more correctly, re-read La Divina Commedia in its French translation in 1917-1918. We can easily picture him resonating with Dante in repeating again and again the closing line of Paradiso: "The love that moves the sun and the other stars’. The close parallels between the Dante and Teilhard was - as Cowell notes –made by the distinguished Dante scholar Barbara Reynolds in her translation of Dantes’s Paradise, published in 1962. This was not the edition I used as an undegraduate, but it was popular at the time – pity that I never used that edition as it would have really helped me to make more sense of Teilhard! Having now read her introduction I am quite amazed at how she pinned down the close parallels between the Divine Comedy and The Phenomenon of Man. This had only just been published in English a few years before (in 1959), so Reynolds is reflecting the extent to which Teilhard’s writings were making a big splash in the 1960s. Reynolds is unequivocal about how Dante would have regarded Teilhard, he would, she says, ’ shine forth among the double circle of lights which are the souls of those who sought to reconcile the truth of man with that of God’. She draws attention to a number of important parallels, but for the purpose of this blog what is fascinating is that she sees Dante’s vision of God as very Teilhardian indeed. At the close of the Divine Comedy Dante sees Christ Omega! And from Teilhard’s point of view that is nothing less than the Sacred Heart: it is ‘ The love that moves the sun and the other stars’. I also have to hand the most recent edition of her translation, and she points out that her (2004) introduction has cut out the four and a half pages devoted to Teilhard and Dante because interest in Teilhard has now ‘diminished’ but that she does not ‘recant’ what she said back in 1963 and she refers us to an article on her views on Teilhard. My own view, for what it is worth, is that there are ( as Reynolds shows) rather too many coincidences between Dante and Teilhard for us to dismiss the idea that he was profoundly influenced by Dante. But that must wait for another blog! But as illustrators have shown, Dante's vision of God is of a Trinity, represented by three circles, in the middle which is Christ. The omega point.

I know nothing about sacred geometry here - but I like the three circles representing the Trinity and the image of Christ in the centre of the centres... Something to think about!
Posted by DWP at 15:26