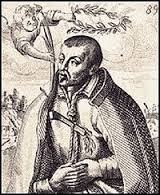 Today we celebrate the life of the Jesuit Martyr, Robert Southwell.  Born  in Norfolk in 1651, and subsequently became a priest . He was arrested, and remained in jail for three years before being brutally martyred in 1595.  He is one of the Forty Martyrs of England and Wales, canonized in 1970. Read more here.

He was a poet and writer of considerable ability.  I have a special regard for one of his poems from  St. Peter's Complaint - I think it is very much a poem of the Sacred Heart.

As I in hoary winter's night stood shivering in the snow,
Surprised I was with sudden heat which made my heart to glow ;
And lifting up a fearful eye to view what fire was near,
A pretty babe all burning bright did in the air appear ;
Who, scorchëd with excessive heat, such floods of tears did shed
As though his floods should quench his flames which with his tears were fed.
Alas, quoth he, but newly born in fiery heats I fry,
Yet none approach to warm their hearts or feel my fire but I !
My faultless breast the furnace is, the fuel wounding thorns,
Love is the fire, and sighs the smoke, the ashes shame and scorns ;
The fuel justice layeth on, and mercy blows the coals,
The metal in this furnace wrought are men's defilëd souls,
For which, as now on fire I am to work them to their good,
So will I melt into a bath to wash them in my blood.
With this he vanished out of sight and swiftly shrunk away,
And straight I callëd unto mind that it was Christmas day.


This beautiful poem came to my mind as I remembered him today at Mass in the Anglican Cathedral of St. Albans.  For many years a Catholic mass has been celebrated - most Fridays - in the Lady Chapel.  It is always a special mass - none more so than today as we recall the brutal execution of St. Robert Southwell for the crime of being a Catholic priest. I wish that more Anglican Cathedrals would make a little space for us Romans to attend  the Holy Mass in our ancient Cathedrals!

The Collect was especially appropriate:

'O God, who teach us that you abide in hearts that are just and true, grant that we may be so fashioned by your grace as to become a dwelling place pleasing to you.'

St. Robert Southwell, pray for us so that one day we too will dwell in the furnace of the Lord's 'faultless breast'.