Reading the icon with Catherine Docherty

At the outset of this blog I was determined to let the blog go where it will.  That is,  to allow the reading of the icon and my own ‘lectio divina’ inform and shape one another.  And in keeping with that approach the writings of  Servant of God, Catherine Docherty,  have just been bubbling to the surface of late. So I guess I should just go with the flow.  She was, of course,  a truly remarkable woman.   Read about her life and work HERE.  and HERE .

By calling people servants of God, and venerable and blessed and ultimately saints, the Church is guiding our spiritual pilgrimage and showing us models of holy lives from which we should learn.  Catherine, by any standard, is a pretty challenging lady to imitate – and her writings are a wonderful treasury of wisdom. As a Russian she naturally had a love of icons and I think that she provides a bridge between the Catholic and Orthodox traditions. She is clearly is becoming a bridge between the two  - for which we must all thank God. ( see HERE )  Like Catherine Docherty icons are also a bridge between Christian traditions and that is, I think, why they are such an important aspect of  healing the wounds of Christianity.  Two things about her writings which have struck me. The first is that she is very visual.  An example of this visual quality of her writing is her description of the Trinity. When I first read it I wondered if Ian had been aware of  her comments because it is captures what this icon of the Sacred Heart is about perfectly. ( Must ask him when I see him next!)  In the Constitution of Madonna House she says this : 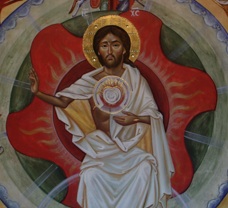 To me the Trinity is fire, flame and movement. It is like an immense disk from the ends of which shoot out huge flames, the whole of which cover the cosmos. But this is not all. I feel myself being drawn into the center of this fire, flame and movement as if into the eye of a hurricane. I am enveloped in it and I envelop it! Because, incredible as it might seem, the Trinity dwells within me.  I am its temple even while I am, in a manner speaking, in its center.  To use human words to explain an unexplainable mystery, I would say that the tips of the wings of the Spirit – for there seemingly are wings – in this movement, in this fire, touch the tip of my heart. Within this movement and this fire, the Father bends over me, as fathers do, with an infinite gentleness, tenderness, and love; and Jesus Christ is at my side, strangely reflecting the face of the Father, whom no person can see and live – unless it is reflected by his Son.

Precisely, a Cosmic God, who is our loving father and bends down to us with an infinite gentleness, tenderness and love.  The Trinity loves us with a human heart and wants to touch our hearts. Elsewhere she describes the Liturgy of the mass as a  ‘sea of fire into which we plunge and come out burning’.  All very teilhardian!*   The second thing which strikes me about her writings is that, just like Teilhard, she believed that the Sacred Heart was a devotion for the future, not just to be left in the past. ( Although it does have a very long past. ) She believed, like him, that we desperately need the Sacred Heart more than ever before! We need to rediscover the heart of Jesus.

The liturgy is slowly doing away with many private devotions. Yet, it will never do away with the devotion to the Sacred Heart because the Sacred Heart of Jesus is the essence of the liturgy expressed in simple and human terms.  For man, the heart has always been a symbol of love. The liturgy was born out of love, Love who is a person, who is God. It is inextricably interwoven with that symbol of love, the Sacred Heart of Jesus. Long ago and far away an ordinary man called John laid his head on the breast of Christ and listened to the heartbeats of the Lord. Who can venture to guess what that man felt as he heard the beat of that mighty heart? None of us can ever be in his place, but all of us could hear, if we would but listen, the heartbeats of God, the song of love he sings to us whom he has love so much. If we love him back we can learn from everything, from every creature, the answering song of love that should dwell in our hearts daily. If we stop to listen to the liturgy of nature, to its rhythm, to its songs of obedience to the laws of the Creator, we could hear and learn how to sing our love song back to the God of love. If we listened to the songs of the city, to the noises that sometimes irritate us, we would realize that even they, in their own way, praise God. The songs of the machines would praise God too if we kept them where they belong—as our servants and not our masters. Yes, even the machines could teach us how to return the love of the Sacred Heart. If we meditated deeply on the Eucharist and on the themes of the Liturgy of the Hours, we would distinctly hear the loving, powerful, immense heartbeats of God. We would hear more; we would hear that heart speaking to us. If we meditated on the most holy sacrament of the Eucharist we would not only hear his heartbeats, we would hear our hearts beating in unison with his, we would be united with our Lord and our God. So let us enter the great silence of our own souls. Let us pray there humbly, loving, plunging into the riches of the Sacred Heart. Then we shall know God in a way that no book can tell us or teach us. Then we will love him so passionately, so tremendously, so utterly and completely, that it will become simple for us to be the kind of Christians we must be. We will not have to say very much. We will only have to walk upright, crying the gospel with our lives, reflecting our Lover in our faces. The world needs the Sacred Heart. The world needs human hearts united to the Sacred Heart. Without love the world is very dark. Let us arise and resurrect the world by bringing love to it and it to God.
from The Gospel Without Compromise, (1976, pp 79-80),
Go here for text - see ' Heartbeats and love songs'.


Catherine Docherty is arguing that the devotion to the Sacred Heart  is an important Catholic devotion  because it is the ‘essence of the liturgy’ in ‘simple and human’ terms.   But, of course, by the 1970s it was falling out of favour.  Not the least of the reasons for this was the iconography with which the devotion was associated.  Even people like Teilhard were uncomfortable with the image and the kind of popular piety it tended to foster.  For example, Henri Nouwen ( a favourite author of Pope Francis, apparently) - who was to write the most powerful  set of meditations on the Sacred Heart - admitted that he came to the devotion rather late in life. In his ( must, must read book ) Heart Speaks to Heart,  Nouwen admits that he had ‘never felt any great desire to pray to the ‘Sacred Heart’’.

Nineteenth –century piety and the statues in which that piety was expressed had kept me away from the devotion that for many people had been very nurturing. (p 11 Kindle edition) 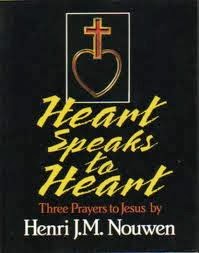 This blog shows that I was in the same boat - with a lot of other Catholics of my generation who just did not get it!  But Docherty argues that we must – as a matter of some urgency – rediscover the Sacred Heart. We need it.  It is not a optional part of the Catholic faith : it is the Catholic faith!  Nouwen - eventually - came to the same conclusion. We need the Heart of Jesus  because it is a meeting point – a hearth – around which all kinds of Catholics - and all kinds of Christian - can gather : it is a devotion which unites both ‘traditional’ and more ‘non-traditional’  Catholics.  For Catherine Docherty a Christianity practiced ‘ without compromise’ needs the heart of Jesus. She was right when she said it, and even more right today when Christianity needs nurturing - big time.