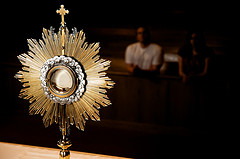 For Teilhard the Eucharist is where we experience a communion with the Sacred Heart.   Indeed, the Eucharist is the Sacred Heart. Thus the two other stories in Christ in the World of Matter are about the Eucharist.   In Teilhard's story ‘The Monstrance’ ( READ in  The Hymn of the Universe) we have a beautiful and inspirational account of an experience during an adoration of the Blessed Sacrament.   I have blogged about the adoration of the Blessed Sacrament a few times already, but the relationship between the Sacred heart and the adoration of the  Blessed Sacrament is central to our experience of the Sacred Heart and it was so for Teilhard.   Indeed, I would go further and say that the adoration of the Blessed Sacrament is central to the future of the Church.  And its revival in recent years is to be welcomed.
I think the story of ‘The Monstrance’ is much easier to understand at first reading than ‘The Picture’.   Its theme is very much the same however: the presence of Christ in all things.   At the outset Teilhard uses a word which is a key word for him: diaphanous.   The story begins with a description of a diaphanous light that illuminate the crystal and designs within a lamp.  For Teilhard God’s presence within all things is ‘diaphanous’ : it is an inner light which fills all creation.  The presence of Christ is transparent in the universe.   The light of Christ is shining through all creation: we just have to ask for the grace to SEE it.  In the story his friend is given the gift of experiencing the 'diaphany of God'. In the The Divine Milieu he writes that with this gift we are given the grace to the world in a new and enhanced way.


like those translucent materials which a light within can illuminate as a whole [we see ]...  the world bathed in an inward light ... It is the calm and powerful radiance engendered   by the synthesis of all the elements of the world in Jesus.. If we may slightly alter a hallowed expression, we could say that the great mystery of Christianity is not exactly the appearance, but the transparence of  God in the universe.  Yes Lord, not only the ray that strikes the surface, but the ray that penetrates, not only your Epiphany, Jesus, but your diaphany. (The  Divine Milieu, Torchbooks, p131)


The green desk lamp with its diaphanous light reminds his friend of another occasion when he had a powerful mystical experience of the diaphany of Christ.   As his friend was kneeling before  the Blessed Sacrament exposed in a monstrance he experiences a vision of the white host  spreading out into the  world – like a spot of oil or a silver wave or a fire spreading over a heath   and illuminating  everything in its path.  But although ‘drowned in its whiteness’  all things retained their own shape and movement:
for the whiteness did not efface the features or change the nature of anything, but penetrated objects at the core of their being, at a level more profound even than their own life. It was as though a milky brightness were illuminating. the universe from within, and everything were fashioned of the same kind of translucent flesh.
The light coming from the host unifies everything but does not  destroy the individual uniqueness of things, but rather completes, purifys and illuminates them from within.
So, through the mysterious expansion of the host the whole world had become incandescent, had itself become like a single giant host One would have said that,under the influence of this inner light which penetrated it, its fibers were stretched to breaking point and all the energies within them were strained to the utmost. And I was thinking that already in this opening out of its activity the cosmos had attained its plenitude when I became aware that a much more fundamental process was going on within it. From moment to moment sparkling drops of pure metal were forming on the inner surface of things and then falling into the heart of this profound light, in which they vanished; and at the same time a certain amount of dross was being volatilized: a transformation was taking place in the domain of love, dilating, purifying and gathering together every power-to-love which the universe contains.
This is another way of looking at the Sacred Heart as explored in the first story.  Divine love as a transformative energy which penetrates unites and completes all  things.
This I could realize the more easily inasmuch as its influence was operative in me myself as well as in other things: the white glow was active; the whiteness was consuming all things from within themselves. It had penetrated, through the channels of matter, into the inmost depths of all hearts and then had dilated them to breaking point, only in order to take back into itself the substance of their affections and passions. And now that it had established its hold on them it was irresistibly pulling back towards its center all the waves that had spread outwards from it, laden now with the purest honey of all loves.
And in actual fact the immense host, having given life to everything and purified everything, was now slowly contracting; and the treasures it was drawing into itself were joyously pressed close together within its living light
What an amazing way to think about the Sacred Heart as revealed in the Blessed Sacrament:  as the centre point of waves of energy which have flowed and penetrated all things and which is pulling all things back into its heart : the core and furnace of this love that had spread out through the universe.
Well, not all things.  Teilhard does not ignore the problem of sin and evil.  As the ‘host closed in on itself’  some elements in the universe are not pulled into the heart.  They remain in ‘exterior darkness’ and lit not by the fire of love, but by  a ‘perverted light’ which is ‘corrosive and poisonous’.  These burn  ‘like torches’ and glow like red embers.
The vision comes to an end.
I heard then the Ave verum being sung.
The white host was enclosed once again in the golden monstrance; around it candles were burning, stabbing the darkness, and here and there the sanctuary lamps threw out their crimson glow.
I think this story is a wonderful companion for a period of Adoration of the Blessed Sacrament.  Below is a prayer which  I have composed is based on this story.
Sacred Heart of Jesus
Open my heart to the enveloping whiteness of the host contained in the monstrance before me.
Let your light penetrate,
consume,
purify,
transform.
complete me,
and unite me to your glowing heart.
May its radiating love cleanse me of all that is perverse, corrosive and poisonous.
Loving Heart of Jesus, grant me the gift to see your light shining through all creation.
Posted by DWP at 12:03