Exaltatio Sanctae Crucis:The Feast of the Exaltation of the Holy Cross 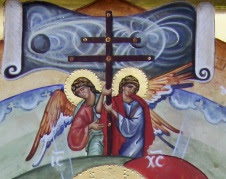 
** I  think I  actually quoted Teilhard about seeing  the universe as 'as one great whole, welded together and evolving organically..’ Or something like..
Posted by DWP at 15:31