The Sacred Heart, Christ the King and Christ-Omega 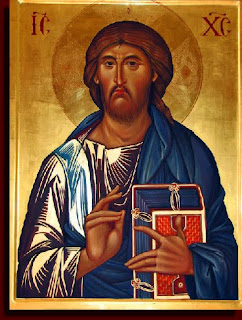 LET US go back at this point to Ian’s blog on the ‘Omega point’ on the 10th February 2011. ( The image on this blog is Ian's wonderful icon of Christ Pantocrator - which is on his website.) There is an important aspect of Teilhard which ought to considered in seeking to make an icon inspired by his idea of the Sacred Heart: the absolutely central place of St Paul in his system of thought. For example, in a note written three days before his death – on Maunday Thursday, 1955 he wrote a few brief notes on ‘What I believe’ in his journal. In the word of the editor of The Future of Man it is ‘his supreme testimony as a thinker and priest’. He notes three ideas: 1. St Paul - the three verses. These refer to Corinthians 1: chapter xv, 26, 27, 28. 9 ; (2) he sets out his understanding of the evolution of the cosmos: as the evolution of the cosmos itself ( cosmogenesis), biological life ( biogenesis), mind (noogenesis) and at the end, Christogenesis. (3) His third note says ‘ the two articles of my creed. The universe in ‘centrated’ with Christ at its centre. And here he links noogensis with the evolution towards ‘Christogenesis’ - Paul’s statement regarding the Parousia: the end of evolution.

Reflecting in Peking in 1940 on the feast of Christ the King which had been instituted by Pius XI in 1925, Teilhard indicates what direction he thought the devotion to the Sacred Heart could take in the future at a time of ‘global crisis’. This essay on ‘The awaited word’ is important for this icon. Why? Because he argues that the world crisis calls for humanity to renew it faith in the future. And in asking about what is the future of mankind, ‘people look to Rome’. Humbly, he suggests that he has something to say about the future of Christianity in the face of the global crisis. Although far way from war-torn Europe he says that as he has been living ‘more closely than others to the heart of the earth’, and he has, therefore, something to say about ‘the remodelled form of worship ‘ ‘to be required by that heart’. He says that the response to the global crisis should prompt the Church to confront the sense of dissatisfaction about Christianity abroad :‘There is something too narrow and something missing in the gospel as presented too us. In spite of appearances, our age is more religious than ever: it is only that it needs stronger meat.’ The crisis is essentially one of ‘transformation and growth’. Christianity needs ‘wider horizons’. If Christianity is to offer an alternative to the ideologies which were tearing the world apart, it had to offer a new way of thinking about the world: it has to promote a new ‘sense of the earth’. We have to replace the narrowness of political ideologies with a sense of the planet as a whole: a sense of being human. To do this, Christianity must evolve: ‘we should follow our creed to its fullest implications, along the logical and historical line of its development. In this we have to proceed in according to ‘Nova et vetera’: using new and old things. In this regard he draws attention to the importance of St. Paul on the Pleroma. For it is :

‘Here we have the concept of God gathering to himself not merely a diffuse multiplicity of souls, but the solid, organic, reality of a universe, taken from top to bottom in the complete extent and unity of its energies…’

St Paul thereby provides the direction which the Church has to take in ‘remodelling’ worship. Teilhard sees the devotion to the Sacred Heart as moving the Church in the right direction of worshiping a Christ: ‘considered in the ways in which he influences the whole human body, and in consequence, the whole human social organism; the love of Christ being seen as the energy in which all the chosen elements are fused together..’ The institution of the feast of Christ the King, he argues, is also a right step in the evolution of our understanding of Christ. But, Teilhard wishes to move further in this line of development set out by the Sacred Heart and the feast of Christ the King. The next step must be towards ‘The Universal-Christ’ as implied in St Paul:


‘What I have in mind, and what I dream about , is that the Church should follow up the logical extension of this movement, and so make plain and actual to the world, as St Paul did to his converts, the great figure of him in whom the pleroma finds its physical principle, its expression and its consistence: Christ Omega, the Universal - Christ.’

For Paul’s time, this idea could not have been fully grasped.

‘But for us, fascinated by the newly discovered magnitude of the universe, it expresses that aspect of God which is needed to satisfy our capacity for worship.’

In other words, our age - the age which is trying to come to terms with ‘global’ crises and the sheer scale and complexity of the cosmos - needs to understand the significance of St Paul for how we think about the future of ‘modern’ worship. It is this image of a Universal-Christ which can promote and a ‘sense’ of the planet as a whole, and the sense of man’s place in the cosmic order. The Universal-Christ: ‘the prime-mover, the saviour, the master ..of evolution’. Nova et vetera: the expansion of the devotion to the heart of Jesus.

‘The Universal –Christ, born from an expansion of the heart of Jesus, requires the historical reality of his human nature if he is not to disappear; and at the same time, as a function of the mechanism specific to love, he does not absorb but completes the personality of the elements which he gathers together at the term of union.’

Teilhard hopes that this vision of the Sacred Heart as evolving into the Christ-Omega can excite and energize Christianity in the face of the challenges of nationalism and ideology which cause so much human misery and destructiveness. His vision is one of humanity evolving a planetary consciousness which can transcend the narrowness of nationalism and sectionalism of the past. For Teilhard, therefore, the Sacred Heart – as Christ Omega – represents a powerful symbol of the unity and ongoing convergence of humanity and the power of love. Christ –Omega, as symbolized by the Sacred Heart as nothing less than the point at which the cosmos and evolution converges.

Let me conclude this blog with Teilhard in a poetic mood. (Although I think we need it in the French to really appreciate his language.) From Le Milieu Divin:

Disperse , O Jesus, the clouds with your lightning! Show yourself to us as the Mighty, the Radiant, the Risen! Come to us once again as the Pantocrator who filled the solitude of the cupolas in the ancient basilicas! Nothing less that this Parousia is need to counter-balance and dominate in our hearts the glory of the world that is coming into view. And so that we should triumph over the world with you, come to us clothed in the glory of the world.

The Sacred Heart – clothed in the glory of the world. Such was his vision of the ‘golden glow’ whose fire burns in the heart of matter and whose love calls for us to open our hearts to this energy emanating from his sacred heart so that we might harness it to build the earth and the Kingdom of God.
Posted by DWP at 15:19