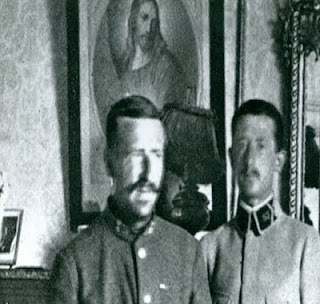 Ian has captured so much in his initial suggestion. I was moved when I read his blog- and that emotional response is important, I think. What Ian has to do is such a challenge. Teilhard believed that the Sacred Heart had to become a devotion fit for the future, and not locked into the past. But the essential truth of the Sacred Heart as revealed to St Margaret Mary must be represented. In this it has to be a (Roman) Catholic image but it also has to be a truly 'catholic' or universal image. We must remember that Leo xiii consecrated the WHOLE world to the Sacred Heart. The whole world, not just the Catholic world but human beings of all faith and none. The whole world: all of God's creation. Ian's ideas sound and feel right to me. But I return to the litany written on a picture of the radiant heart of Christ which was found on his desk. It is this stage worth reflecting on these words. Jesus is seen as - inter alia - the 'heart of the world'; the 'heart of matter'; the golden glow; the world zest' ; ' the focus of 'cosmic convergence' and the ' focus of ultimate and universal energy. Centre of the cosmos'; and he prays ' Heart of Jesus unite me to yourself.' It would be good if we could get a copy of this actual picture. Also, we must never forget that an icon should be an aid to prayer and contemplation. I think at this stage, I should reflect on the prayers used in the devotion to the Sacred Heart. This should be a basis of moving forward. But Ian's ideas as expressed in his his blog is an excellent starting point . Thanks so much Ian. The picture above is taken from a photograph of Teilhard with his family at Sarcenat, 1917. It is fitting that his head is illuminated by the 'golden glow' of the Sacred Heart.
Posted by DWP at 08:48