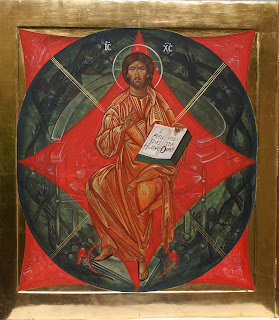 Here we have, I think, a good theological model for understanding the ideas of  energy perceived mystically by Theilhard, and a context which puts it deep within the mystical tradition of the Christian Church, especially that of the east.  This is important, iconographically, because this art form has been profoundly influenced by this theological mysticism, especially hesychasm. Icons of the Transfiguration, as well as such luminary saints as St Seraphim of Sarov and St Simeon the New Theologian have already begun to explore how we can represent this divine energy at the heart of all creation, emanating from the very nature of God in Himself.
Posted by Elias Icons - Ian Knowles iconographer at 15:32