Well the time arrived for preparing the board onto which the icon will be written.
As this is a domestic icon I chose a smaller size, but as it is an important piece for David, and with potential use in a public liturgical setting, not too small. As potentially I can see David wishing to use it in various locations, for example if he wants to give a talk on this subject, I didn't want the board to be too heavy, so set to a thickness of 2cm, battoned on the rear to limit the effects of warping. This is a ancient technique, and inspect the rear of an icon and you often find inserts of one kind or another. As the gesso (the surface on which you apply the tempera paint) is applied in a very liquid form the board can warp without these struts.
The dimensions of the image were determined by the cosmic references: so a circle (the Divine) within a square (the creation). However, a perfectly square board lacks a certain elegance, so I have increased the borders top and bottom. So the inner square is 42 cm on all sides, while the overall size of the board is 50x46.
I have used limewood, which has been the standard wood used for icon boards since time immemorial. Light, non-resinous (cf pine which is full of sap which can affect the painting surface), fairly resistant to bugs and beetles,  and stable it is ideal if a little difficult to get your hands on. Fortunately, I have a good local supplier, Cheltenham Hardwoods, and Martin there prepared a flat board for me with the struts. I routed the centre area, called an 'altar', to a depth of 2mm, yesterday, and then applied a layer of medical gauze with rabbit skin glue that I had made up the day before. A layer of glue was also applied to the back and sides, again to help stablize the wood against warping during the gesso process. 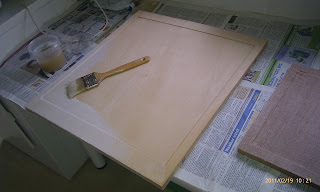 This was left overnight, and today I began to apply the coats of gesso - a fine chalk powder dissolved in the glue mixture and applied hot. Here you can see the gesso beginning to be applied to the glued gauze, which acts as a 'key' for the gesso to adhere to. This is taking place at my mother's house as I don't, unfortunately, have a dedicated studio as financially it is impossible for me to rent one while I am out of the country doing my voluntary work in the Holy Land. Mum is happy to oblige though, so another word of appreciation to her.
I should finish applying the 12-3 coats later this afternoon, and will then leave it to dry while I am away, ready for sanding when I return to the UK in early April.
Posted by Elias Icons - Ian Knowles iconographer at 13:07