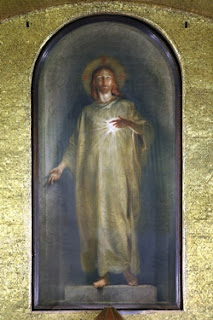 I spent a few days in ( a very hot) Milan recently and managed to find some time to do a little tourism.  Fortunately,  I was based at the Catholic University of the Sacred Heart - founded in 1921.  And so, I was able to attend mass on the first Friday of July in the Cappella del Sacro Cuore in the university. It is very beautiful, and I would encourage anyone who can to pay a visit.  High above the altar  is a remarkable painting by - I later discovered on my return to the UK - Lodovico Pogliaghi (1857-1950)  (Read about him here) . It is rather like a 3D image, and  I could not decide if it is a painting or a statue! But I think it is a painting. Underneath on the wall there is a famous line from St. Thomas Aquinas's great hymn:   ADORO TE DEVOTE LATENS DEITAS” (“I adore you devoutly, hidden God”)

The painting was commissioned by the founder of the university, the Franciscan, Padre Agostino Gemelli (1878-1959- read about him  here) .  It was originally located in the the building in Via Sant' Agnese and was installed in the present chapel on its completion in 1932.  Copies of the image may be found in rooms in the university.  As an image it was - like Teilhard's Pinta picture - used for holy cards. 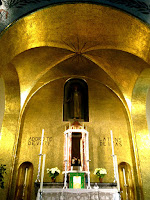 It appears to have been painting executed around the same kind of period - early 1920s - as the Pinta image (Here) that Teilhard loved so much. Walking around churches close to the chapel the sense of it being a radical break from the traditional image becomes apparent. Next door, for example, in the Basilica of Sant'Ambrogio, there is a chapel to the Sacred Heart, with a traditional image, and a little further away in Santa Maria delle Grazie  there is also a pretty standard representation.  So the image in the painting in the Cappella del Sacro Cuore  is quite a departure from the norm.  As in Pinta's image the focus on on the glowing love of God. As the light catches the 'golden glow' the image is quite stunning and the eye is drawn into a contemplation of the God who is hidden in the eucharist.  This is the Sacred Heart we adore, hence the words on the wall beneath: ' ADORO TE DEVOTE LATENS DEITAS'.  No doubt this is to prompt the students and faculty to remember their Aquinas! The next lines are, of course: 'Quæ sub his figuris vere latitas; Tib se cor meum totum subjicit, Quia te contemplans totum deficit'  As we contemplate and adore the hidden God revealed in the heart of Jesus, we place our hearts before Him: 'Tib se cor meum totum subjicit'.

The artist was  ( in all probability) working to a brief from Fr. Gemelli, and I think what we have here is a very Franciscan - if not intensely Franciscan -  and very modern image of the Sacred Heart.   It recalls (perhaps) Francis's Letter to all the friars:

Let the whole of mankind tremble, the whole world shake and the heavens exult,  when Christ, the Son of the living God, is present on the altar in the hands of a priest.  O admirable heights and sublime lowliness! O sublime humility! O humble sublimity!  That the Lord of the universe, God and the Son of God, so humbles Himself  that for our salvation He hides Himself under the forms of bread! Look, brothers, at the humility of God and pour out your hearts before Him!  Humble yourselves, as well, that you may be exalted by Him.  Therefore, hold back nothing of yourselves for yourselves  so that He Who gives Himself totally to you may receive you totally.  ( Here.)


The painting in the chapel is also is strongly suggestive (to me) of St. Bonaventure ( a great friend of St Thomas Aquinas) whose prayers and writings show the deep Franciscan love for the Heart of Jesus. As Bonaventure prayed:

'From the burning heart of Jesus flows his blood, hot with love.  Jesus showed us from the cross his faithful heart, glowing with love....' (cited in T. O'Donnell, Heart of the Redeemer, Ignatius Press, 1989 p 101)


The Franciscans have contributed immensely to our understanding of the Sacred Heart ( I always think of Francis and Bonaventure when I look at the seraphim in the icon!) - and it is not a coincidence that St Margaret Mary recounts that St. Francis was her guide. He is depicted in the mural at Paray le Monial.  Teilhard too had a special regard for St. Francis. 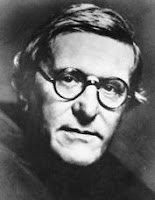 There is another aspect of the image which is interesting: it is the image which shows the aesthetic preference of a another priest -scientist.  Fr. Gemelli was a physician and scientist who, like Teilhard sought to reconcile Christian faith with modern science.  Gemelli actually proposed Teilhard (and Henri Breuil) for membership of the  Pontifical Academy of Sciences, but this was opposed due to Teilhard's supposed 'Darwinist' tendencies.  It is interesting that both priest-scientists should have seen the Sacred Heart in the same way: the Pinta image and Pogliaghi's image are remarkably similar! For both men, whose lives were dedicated to reconciling science and their Christianity, the Heart of Jesus was the great symbol which inspired their religious and scientific lives.

As I read and talk about Laudato Si, it seems to me that the work of Gemelli and Teilhard to reconcile faith and reason in the modern world was not in vain!

One final thought which later occurred to me (!!?) was the entrance to the chapel.  As you enter you see an important quote over the door: Nitium sapientiae timor Domini. “The Fear of the Lord is the beginning of Wisdom”. (Psalm 111, 10, Sirach, 1, 1) 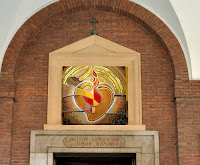 All too often when we think about science and knowledge we default to Bacon - 'knowledge is power'.  Here at the Catholic University in Milan they remind students and faculty that wisdom begins when we fear the Lord. Wisdom begins when we realise in all humility the limits of human understanding, and the infinite knowledge and wisdom of God. Knowledge may be power  BUT wisdom is about humility. As we remember this, we also recall that in the  Litany of the Sacred Heart,  in which the humble and gentle heart of Jesus is described as the the treasury of all wisdom and knowledge.


As you reflect on the symbol of the Sacred Heart in this beautiful chapel, it is well to remember that the love of God is indeed the alpha and omega of all wisdom.