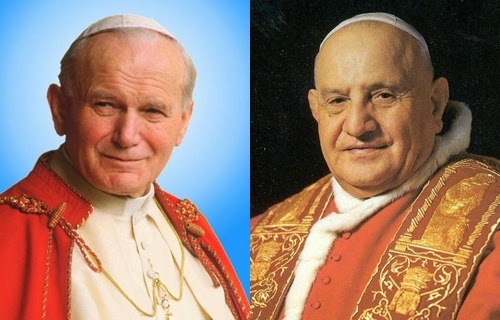 How fitting that the canonisation of John XXIII and John Paul II should take place on Divine Mercy Sunday - the day we remember the loving and merciful heart of Jesus.  Both Saints had a great devotion to the Sacred Heart  - and , of course, St. John Paul was the pope of the Sacred Heart and of its Divine Mercy. It is also appropriate that the gospel reading at today's mass told of Thomas's doubt and his encounter with the wounded Christ.  Pope Francis summed it up beautifully : 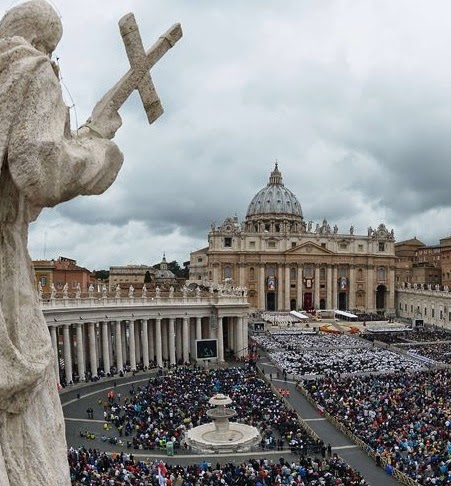 At the heart of this Sunday.. are the glorious wounds of the risen Jesus. He had already shown those wounds when he first appeared to the Apostles on the very evening of that day following the Sabbath, the day of the resurrection. But, as we heard, Thomas was not there that evening, and when the others told him that they had seen the Lord, he replied that unless he himself saw and touched those wounds, he would not believe. A week later, Jesus appeared once more to the disciples gathered in the Upper Room, and Thomas was present; Jesus turned to him and told him to touch his wounds. Whereupon that man, so straightforward and accustomed to testing everything personally, knelt before Jesus with the words: “My Lord and my God!” (Jn 20:28).  The wounds of Jesus are a scandal, a stumbling block for faith, yet they are also the test of faith. That is why on the body of the risen Christ the wounds never pass away: they remain, for those wounds are the enduring sign of God’s love for us. They are essential for believing in God. Not for believing that God exists, but for believing that God is love, mercy and faithfulness. Saint Peter, quoting Isaiah, writes to Christians: “by his wounds you have been healed” (1 Pet 2:24, cf. Is 53:5).  Saint John XXIII and Saint John Paul II were not afraid to look upon the wounds of Jesus, to touch his torn hands and his pierced side. They were not ashamed of the flesh of Christ, they were not scandalized by him, by his cross; they did not despise the flesh of their brother (cf. Is 58:7), because they saw Jesus in every person who suffers and struggles. These were two men of courage, filled with the parrhesia of the Holy Spirit, and they bore witness before the Church and the world to God’s goodness and mercy. They were priests, bishops and popes of the twentieth century. They lived through the tragic events of that century, but they were not overwhelmed by them. For them, God was more powerful; faith was more powerful – faith in Jesus Christ the Redeemer of man and the Lord of history; the mercy of God, shown by those five wounds, was more powerful; and more powerful too was the closeness of Mary our Mother.

The wounds of Jesus remain as a sign of his love and mercy. As we contemplate an image of the Sacred Heart  we, like Thomas, can only proclaim ' My Lord and My God'.  We, like Saint John XXIII and St John Paul II should not be afraid or scandalised by the wound in Christ's side, as it serves as an enduring sign of God's infinite love and his infinite mercy.

St John XXIII and St John Paul II pray for us that we may place all our trust in the gentle and humble heart of the incarnate word of God.
Posted by DWP at 15:01