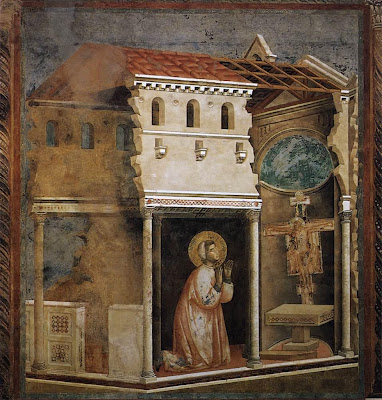 As I heard the name of Francis announced last Wednesday night I felt, like many Catholics, I am sure, elated and deeply moved by the choice of the name of one of our most beloved saints, St. Francis of Assisi. The image that came into my mind was the famous picture by Giotto of St. Francis being told by Christ in the church of San Damiano to ‘repair my Church because it is falling into ruin’. Francis (the first) has, like his namesake, now taken on the job of ‘God’s bricklayer’.

At a time when the church is indeed in a poor state of repair, the new Pope has accepted the mission to repair and rebuild.  On the face of it a 76 -year-old man with one decent lung is hardly the kind of person that you would think would have the strength to undertake the task of tackling the mess that has proven too much for his predecessors.  Significantly, to do this he has wisely chosen to show that reforming the Catholic Church can only be done by harnessing one of the most empowering of all virtues (and the one that St. Francis exemplified): humility.

Like St. Francis, the new Pope has a reputation for humility and a love of the poor.  But St. Francis also realized that he could not repair San Damiano on his own.  Pope Francis will also need a good team of co-workers to stop the Church of the 21st century from falling into ruin. It may be, however, that because Pope Francis is an outside contractor from Latin America rather than a European bricklayer he will better able to get on with a job that was manifestly beyond the capacity of more local builders.  Without assembling a team of men and women (St. Francis had St. Clare!) with the necessary skills who share his commitment to repairing the Church, he is unlikely to get very far.  So the next few months will be a critical phase of his project management: recruiting a team of co-workers who are eager to get on with the job of laying new bricks and repairing the damage.

The choice of the name Francis sends the strongest possible message to the world that the repair and rebuilding which is so very necessary can only be accomplished through the exercise of humility: repairing the church can only come about by understanding the poverty of the Church and by placing the poverty of so much of the world at the very centre of the re-building process.  A Pope named Francis must embrace poverty of spirit as well as the poor of the world.  As he made it clear in his first press conference, he chose the name because St. Francis was:

‘..the man of the poor. The man of peace. The man who loved and cared for creation and in this moment we don't have such a great relationship with the creator. The man who gives us this spirit of peace, the poor man who wanted a poor church.’

A poor church must recognize that the election of Jorge Mario Bergoglio demonstrates in a most dramatic fashion that Europe is no longer the centre of the Catholic world.  The Catholic Church in Europe must also learn humility and understand its own poverty and deficiencies.

The simple name ‘Francis’ is rich in meaning to Catholics all over the world.  It is a truly revolutionary name as it evokes not only St Francis’s humility and concern for the poor and social justice, but also, as the Pope noted at his first ‘press conference’, St. Francis’s love of nature and creation.  It is not just the Catholic church that is in need of repair: so is what Francis called (in the ‘Canticle of the Sun’) our ‘ sister, mother earth’.  The concern for social justice and human greed and materialism we find in St Francis is inextricably connected with environmental justice and the importance of respect for all creation.

There is another aspect of  ‘il Poverello d'Assisi’ that may serve as a guide to how the new Pope may conduct his pontificate: peace.   St. Francis, in his humility, was a man of peace: he is famously associated with a prayer about becoming a channel or instrument of peace.  In 1219, for example, whilst the Crusaders were laying siege to the camp of Sultan Malek – Kemal, St. Francis made the brave gesture of going to see the Sultan and explain the Christian faith to him. So, it may be that God’s new bricklayer will also see building a new relationship with Islam and breaking down some of the walls that keep faith communities and traditions apart as a central aspect of his pontificate. Bricklayers  - especially the great bridge-builder (‘Pontifex Maximus’) – must also build and repair bridges and not just Churches.

If all of this sounds a very big contract for a 76 -year -old Argentine bricklayer, we should reflect that a previous Pope, John XXIII (1958-1963), was 77 when he took the job on! And John set out an agenda that has had the most wide-ranging impact on the Church.  (He was expected to be more of a ‘caretaker’ than a bricklayer. ) Pope Francis, by virtue of a name that is so closely associated with humility, poverty, social justice, the natural world and peace, may well be able to lay a more level, firmer and stronger foundation for a Church poor in spirit in the 21st century than a Pope by any other name.  Few Popes in history have begun their pontificate with such high expectations, and few have had a name that is so universally loved and which evokes such a powerful critique of the materialism of modern society.  All this means that the new Pope has provided a clear criteria or bench mark by which we may judge his papacy: ‘how true is his work to the spirit level of ‘il Poverello d'Assisi’?’  That is quite a name to have chosen!