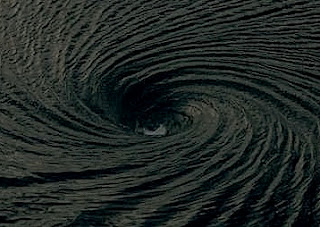 This month, which began with the feast of St. David,  I have been reflecting on the life and teachings of the saint after whom I was named.  And, as always, in using the icon as a way  of focusing my reflections and prayer, I am drawn into the Sacred Heart as if in were a whirlpool in the waters of my life.

We know so little about St. David, but what has come down to us is remarkably rich and revealing. It is almost like a kind of formula or algorithm : keep the faith, be joyful and remember the little things.  Amongst the things we remember is that his monks were required to drink only water and eat no meat and pull the plough themselves rather than use oxen.  David - 'Aquaticus ' - is a saint who, above all,  urges us to remember and explore water as a powerful symbol of the divine.  Water features in many of the stories about him. He must have preached many times on the theme of water and reflecting on water and lent we are reminded that Jesus, having been baptised by St John goes into the desert 'full of the Holy Spirit'.  In his teaching Jesus frequently refers to water or uses water, and describes himself as 'living water'.  In the Sacred Heart we remember that the heart of Jesus was pierced by a lance and that out came blood and water.  Without that living water we live in a desert and in a continual state of thirst.  David - the water man, Ddyfrwr - must have used the idea of water as a key metaphor in his preaching and no doubt he would have much to say about the water which flows  from Christ's heart.  Every time his monks drank their cold (black) water they must have been prompted to think of the living water from the heart of Jesus.  This was their joy and  the faith.

David's teaching also prompts us to remember that lent is about POWER.  It culminates in Satan tempting the physically weakened Christ with power.  I think David's focus on water and his vegetarianism combined with his insistence that monks do the work of animals is also a  message relevant for  our lenten journey.  By insisting that his monks do the work of oxen he was getting them to understand humility and the humility of God.  His monks are asked to give up the power they have over the animal kingdom: they will not eat them and they will not exercise power over them. The kingdom of God was not about power over people and God's creation.  His followers must have  been taught to be 'meek and humble of heart' - like Jesus, who humbled himself to share our humanity: to be little, humble and close to the earth (humus) .   David wanted his monks to humble themselves by sharing in the sufferings of animals, as Christ shared our suffering.  And, just as they must not try to exercise power over animals, they must not allow anything to have power over them.  Hence, no alcohol and a simple life.  A pure, meek and humble heart could only be attained by humility and self-control.  This was the joy that doing the little things - and becoming little and close to the earth, like the oxen - would bring.  I think that   David must have taught that lent was  a period for empowerment through disempowerment and (what Teilhard called) diminishment : it was a time for us to travel into the inner desert, but also a time to drink  the living water.

**At the blessing of this mosaic by Ifor Davies, Pope Benedict had this to say about Dewi Sant:

'Saint David was one of the greatest saints of the 6th century, that golden age of saints and missionaries in these isles, and he was thus a founder of the Christian culture which lies at the root of modern Europe. David’s preaching was simple yet profound: his dying words to his monks were, ‘Be joyful, keep the faith and do the little things’. It is the little things that reveal out love for the one who loved us first (cf. 1 Jn 4:19) and that bind people into a community of faith, love and service. May Saint David’s message, in all its simplicity and richness, continue to resound in Wales today, drawing the hearts of its people to renewed love for Christ and his Church.'


The Pope ended his greeting with the words: 'Bendith Duw ar bobol Cymru! God bless the people of Wales!'
Posted by DWP at 10:35