Reflecting on the importance of St. Margaret Mary, I find myself drawn back to the fresco painted by Luc Barbier once more.  SEE HERE
As we know, there is ample evidence to suggest that it is probable that Luc Barbier's fresco was very influenced by Teilhard's ideas about the Sacred Heart (Read Here) .  But it is also clear from the picture that the artist researched the topic extremely well.  Rather uniquely for a picture of the Sacred  Heart he makes us reflect on the communion of saints and prompts us to explore the role of  people other that Saint Margaret Mary.   There are two twentieth century figures represented: Fr. (now Blessed, since 2005)  Charles de Foucauld and  Fr. Mateo Crawley-Boevey. (Read about Blessed Charles  HERE. )

Reading about Blessed Charles I was fascinated to see that Barbier  may well have picked up on the relationship or parallels between de Foucauld and Teilhard.   In his book Christendom Awake: On re-energising the Church in Culture,  (HERE ) Aidan Nichols O.P  draws our attention to the relationship between the role of the Sacred Heart for both men.  He notes that for de Foucauld, and for those who followed him – the  Petits Frères and Soeurs – the Sacred Heart was to be the ‘matrix’ of prayer and spiritual life:
..Christ's heart is seen as the source from which human beings can be rejuvenated, to the point of finding their own hearts alive with Christ's love, especially for the wretched, the sick, the poor. For de Foucauld, personal devotion to the heart of Christ is the central and irreplaceable focus of the life of prayer, and, so far from, as is sometimes alleged, leading to a self-indulgent and individualistic piety, it is the essential way in which to affirm the universal scope of the Incarnation. ..
Fr. Nichols argues that Teilhard:
….was to offer in his own spirituality, as interpreted by cardinal Henri de Lubac, a remarkable theological presentation of de Foucauld's fundamental intuition. If prayer, understood as loving devotion to God in Christ, is truly authentic, then the one who prays will become a channel for Christ's divinising presence, with unlimited ramifications. Prayer is to be at once more personal and more cosmic, more closely related to the entire work of God in creation and transfiguration. According to de Lubac, it was in the context of prayer that Teilhard found his way to a sense of the God of Christian faith which would make sense in a world increasingly aware through scientific discovery of the immensity of the cosmos, and the power to master nature which technology places in human hands. For Teilhard, the inner dynamism of the cosmos, seen in the emergence of man in the evolutionary process, is 'personogenesis', the making of persons, but only the heart of Christ fully reveals and realises the personifying depth of the Creator's love. As he wrote: 'The true infinite is not an infinite of dispersion, but of concentration'. ..In God, for Teilhard, lies the ultra-personal, and ultra-personalising centre. In prayer we place ourselves within this centre's radiance. Indeed prayer is existence in the ambience of this personalising centre of the world. He traced the conflict that was ravaging the world by 1940 mainly to 'the inner fact that men have despaired of this personality of God'. For Teilhard, the sacred heart of Jesus is the point from which the fire of God bursts into the cosmic milieu to set it ablaze with love. In prayer, we relocate ourselves in this divine source, and in contemplating him, contemplate at the same time the destiny of our world. Prayer, precisely through being Christocentric, has a cosmic significance. (pp210-11) (my emphasis)
But Fr. Nichols also points out that that prayer focused on the heart of Jesus carries with it some dangers.   And here, I think,  he gets at the problem which this icon set out to address: if we are not careful,  the devotion can become very sentimental and detached from the teachings  of the Church as a whole.  And this is also the case for ‘Teilardisme’: 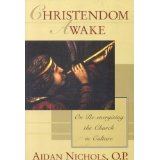 Where such a spirituality becomes disengaged from the wider theological, historical, sacramental and moral structure found in the Church's doctrine, it rapidly degenerates into a vague mystical benevolence, as with Teilhardisme at its worst, or into the sentimental banalities of many modern prayer cards, with their kittens, butterflies and soporifically trivial uplifting thoughts. 'All you need is love' is both a truth and an untruth, or, rather, it has its properly evangelical truth only in the context of all the dogmas of the Church.  (p214)
The Sacred Heart that was so central to the spirituality and prayer life of Blessed Charles de Foucauld and Teilhard and the others represented in Barbier’s fresco  in Paray-le-Monial  - BUT , it must always be situated in and engaged with  wider theological, sacramental, moral teaching of the Church, otherwise it is a devotion which can result in people  becoming detached and not engaged with Catholic dogma.  My own view is that is what Teilhard was arguing.  He wanted to de-sentimentalize the Sacred Heart and get us to see it in a new light: in which case, therefore, we must always remember that the Sacred Heart is central to what Teilhard is saying and Teilhard must always be read from the perspective of the Sacred Heart otherwise it can and does degenerate (rapidly) into new-age mysticism of the very worst kind.   At the same time, we must also keep in mind that Teilhard did not want to abandon the devotion to the Sacred Heart which spread out from Paray-le- Monial : on the contrary, he wanted to see it evolve and become more relevant. Otherwise it would become increasingly irrelevant.   I think he was right about that.   If Christendom is to awake then  we have to become more alive to  the centrality of the Sacred Heart for the great task of re-energizing the role of the church at a time of profound cultural crisis.  And prayer is therefore both a profoundly personal experience, but also one that has cultural and indeed cosmic consequences.


Fr. Aidan's  words above are worth repeating in the context of both the fresco in the chapel at Paray-le-Monial and in terms of reading our icon:


In God, for Teilhard, lies the ultra-personal, and ultra-personalising centre. In prayer we place ourselves within this centre's radiance. Indeed prayer is existence in the ambience of this personalising centre of the world. He traced the conflict that was ravaging the world by 1940 mainly to 'the inner fact that men have despaired of this personality of God'. For Teilhard, the sacred heart of Jesus is the point from which the fire of God bursts into the cosmic milieu to set it ablaze with love. In prayer, we relocate ourselves in this divine source, and in contemplating him, contemplate at the same time the destiny of our world. Prayer, precisely through being Christocentric, has a cosmic significance. 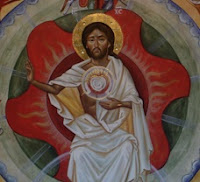 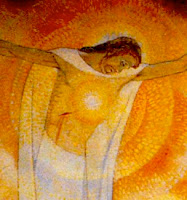 When we look at the Barbier fresco we can see this 'divine source' pulsing through creation.  The figures in the fresco are inviting us to place ourselves in the presence of  this divine source - as they did.   In our icon the same message is conveyed by fire glowing at the heart of the image and by the fire encircling Christ filling all creation.  And here too we are being invited by the the Blessed Virgin Mary, and St. John the Baptist  to 'relocate ourselves' in the source of divine love and energy.
Posted by DWP at 10:36