Second Week of Advent: Traveling to Bethlehem with St. Teresa and Teilhard 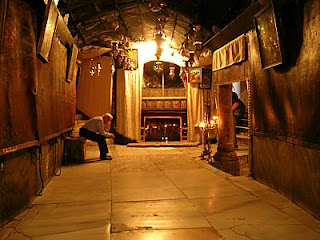 Teilhard and St. Teresa a have much in common as mystics and it is clear that Teilhard was a great admirer of her work.  And I think the difference between them is summed up in how they saw the divine centre.  Both describe the presence of God deep within our souls and reflect on how we may become closer to God in our hearts.  Both explore what prevents us from drawing closer to the ultimate union with Christ.  Both saw the journey into this divine centre as about becoming less and less centered upon ourselves and more and more centered on God.  Both see this as about a process of purifying our hearts.   Both see Christ as calling us into a loving union.  The differences perhaps are ones of language and poetry and of historical context.   Teilhard comments, for example, that: 'St. Teresa is made terrifyingly distant from us by her own religious imagery and a lack (common to her time) of all cosmic concern.. But she expresses, for that time, an attitude that must be preserved’. (cited in de Lubac’s  The Eternal Feminine, p 192.)   He also notes that ‘St. Teresa [was] : a typical case of an element undergoing reversal in Ω. Such an interior event is more important biologically than a huge war’ (de Lubac, p223)  So St Teresa is extremely important – despite the imagery and lack of cosmic concern!  For Teilhard the Omega point is another way at looking at the Sacred Heart, so I think  he is saying that  what St Teresa is describing and analyzing in her writings is the process of an individual becoming progressively centered on and united with the Sacred Heart.  Teilhard sees the Sacred Heart as energy or force  field pulling us towards the divine centre – the divine milieu.  This idea of Omega as the focal point is clearly very similar to what we find in St Teresa’s idea of having to journey deep into ourselves by listening to the call and following the light of the God within our hearts.   She sees this as a kind of personal evolution moving through a number of stages (7) and culminating in a union – or ‘marriage’ with Christ (Ω).  Like St. Teresa who uses the idea of a sphere in whose the centre or heart we find God, Teilhard also uses the same metaphor.  The divine milieu is a  sphere, centre,  or circle which is the focal point of all creation – rather than just the individual soul.  As he puts it: ‘The divine milieu is, in reality, a center..the ultra-active point of the universe’.  God is the universal milieu and ‘ the ultimate point upon which all reality converges’.  Teresa's writings for Teilhard lacked this cosmic idea of the divine centre: is is not only within us, but ahead of us.

Hence, for Teilhard, the experience related by St. Teresa is an evolutionary event – of more significance than a ‘huge war’!!   I think that what Teilhard  is saying is that when we read St Teresa we have to see her experience on this cosmic scale: as a manifestation of the way in which the universe is being progressively ‘christified’.   I tend to agree with Teilhard, her language and imagery is very much of its time and place.  As I am not a 16th century Carmelite nun I do find it something that is not exactly appropriate for how I think and live, but even so I find that the idea of my journey to the Sacred Heart as essentially a journey of self knowledge and re-centering our self on Christ as providing great insight: Teilhard’s point was this journey was both an journey to the centre of our souls,  but also to the centre point at which all reality converges.
Thus the significance of St. Teresa for our journey to the heart of the Christ child in Bethlehem and in our own heart is of immense significance.  In  Human Energy he makes this point very clear:
The growth of the human collective consciousness at present taking place does not prevent there having been in the world before us (in a not too distant past) men better endowed as individuals than many of our contemporaries, nor would I affirm that the love of God did not have in Paul, Augustine or Teresa of Avila a certain potential richness that we should have difficulty in finding in any Christian living today. What I mean is that under the influence of rare passions like those of Paul, Augustine or Teresa, the theory and practice of total love have ever since Christ been continually clarified, transmitted and propagated. So, as a result of the two thousand years of mystical experience that support us, the con- tact we can make with the personal centre of the universe has gained as much in manifest riches as our possible contact with the world's natural spheres after two thousand years of science. Christianity, I would dare to say, is neither more nor less than a phylum' of love in nature. Now regarded from this point of view, not only is it not stationary, but it is so much alive that at this very moment we can directly observe it undergoing an extraordinary mutation by raising itself to a steadier consciousness of its universal value. ( Human Energy, Collins, 1969: 157)
St. Teresa ‘s mystical experience is therefore an important stage in the evolutionary journey of humanity.  As we appreciate that we can only encounter the Sacred Heart by undertaking a spiritual journey through our own souls, and purifying our own hearts, the message of St Teresa – and Teilhard becomes ever more indispensible for our journey.
Teilhard himself was very much influenced by St. Teresa.  His essay ‘The Mystical Milieu’ written in 1917,  is regarded as being inspired by the Interior Castle.  (Read here in Writings in Time of War, pp 115-150)  Whereas St, Teresa gives us the idea of 7 stages  in the mystical journey to the divine centre, Teilhard  uses the idea of 5 circles of experience leading to a mystical experience of the divine centre.   I recommend taking both Teilhard’s essay 'The Mystical Milieu ' and St Teresa’s Interior Castle as useful 'maps' to take on the road to Bethlehem, and the journey to the centre of our hearts.
Posted by DWP at 10:45