The Sacred Heart as Batoni type: Teilhard and the Pinta picture 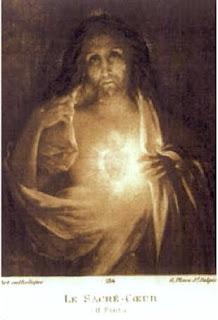 The Batoni type of Sacred Heart was the version approved by the Jesuits. After all, they had commissioned it in the first place. So it is likely to have been the image that was in common use in the Jesuit as in the rest of the world. It appears that Teilhard did indeed have a copy of this Batoni image in his breviary. In their book on Teilhard (1977) Mary and Ellen Lukas report the following incident in New York in 1952:

‘One afternoon when, in rising from a tea table Teilhard fumbled with his breviary and a garish prayer card fluttered out…it was an image of a Jesus with ‘a pale effeminate face’ proffering a penny valentine ‘Sacred Heart ‘ to the beholder – a Saint Sulpcian image very much like the one she remembered seeing on the bureau of her French governess when she was a child…As he bent down to pick it up the card, his eyes met Mrs Straus’s . She saw the wall go up, and for a moment Teilhard blushed. He shoved the card back inside the book and changed the subject.’

The authors comment that this showed ‘Teilhard’s attachment to this clumsy attempt to represent the un-representable lay in the fact that it reminded him of the profundity on which his whole philosophy was based’ (Lukas, 310). I think that is fair comment.

This suggests that Teilhard did indeed carry the Batoni type of image with him, but was rather embarrassed about showing it. However , we do know from various sources, that he was especially fond of a particular image of the Sacred Heart which was painted by one Henri Pinta in 1921. It is this image which was so dear to him that is displayed on this blog. Pinta uses a basic structure which is common to the traditional ( Batoni ) type of image. BUT with some big differences which obviously appealed to Teilhard: the facial expression is not like the Batoni type at all , and the heart is almost invisible – in fact it appears to be transparent as was noted by St. Margaret Mary. The most noticeable feature is the use of chiaroscuro to emphasize LIGHT. This was Teilhard’’s Sacred Heart, the ‘golden glow’ : the God of evolution.

It was this holy card reproduction which – as King notes (in his book Teilhard’s Mass,2005: 120) - he carried with him for much of his life. He gave his copy to his dear friend Lucille Swan when she was leaving China in 1941. He subsequently obtained another copy and it was, it seems, this second copy which was on his desk when he died. ( As King had access to Swan's papers it is likely that the image in his book is taken from the copy of the Pinta picture given to her my Teilhard.) I presume, it was on this Pinta card he wrote his litany as mentioned in an earlier blog. On the front would have been the words : ‘The God of Evolution’; The Christic, the Trans-Christ. Jesus the Heart of the World. Jesus the Essence of evolution. Jesus Motor of evolution.’ And on the back his litany.

So it would appear that Teilhard used both the Pinta and the Batoni image, to complement one another: nova et vetera. But there can be no doubt that it was the former which better captured what he believed was the deeper meaning of the Sacred Heart and what he believed would be the future of the Sacred Heart. The Batoni image would have been the image used by his mother and perhaps a large version was in the family home. It was the favoured image of his order, so he would have used it exclusively until he came across the Pinta picture. Perhaps the Pinta version was not available until the mid to late 1920s. In any eventuality, it does not appear to be popular as I have yet to track one down. The copy in this blog comes from a book by the Jesuit Edouard Glotin ( Bible du Coeur de Jesus, Press de la Renaissance, 2006.) SEE BOOK HERE I cannot find any other image, so I hope he can excuse me using it here. I am trying to find an original, without much success. Thomas King uses a copy in his book but does not give the source. Perhaps it is the actual one! It is clear that the Pinta image exactly captures his sense of the direction which the devotion should take in the future. This is the image which he saw as being the next stage in the evolution of the devotion. Indeed, the next stage in the development of Christianity itself.

Ian, I think it is this image which has to be taken as an important source of inspiration for us. Clearly, I have to reflect on this image, and try and understand its relationship to the evolution of the image and the devotion to the Sacred Heart. So, more blogs on this to follow.
Posted by DWP at 13:47